WoWWiki
Register
Don't have an account?
Sign In
Advertisement
in: UI, World of Warcraft achievements, Wrath of the Lich King
English

For achievements earned by a guild, by the combined efforts of guild members, see Guild achievements.

Achievements are self-contained goals that offer new challenges, satisfy goal-oriented players, and allow others to see your accomplishments in World of Warcraft.

Wrath of the Lich King, the system launched with exactly 749 individual achievements covering every aspect of gameplay, including world exploration, PvE, PvP, professions, and character development; from the purely whimsical to the truly epic, there is something for everyone. Some achievements come with in-game rewards such as mounts, tabards, vanity pets, and titles. All of these rewards are purely cosmetic and just for fun, but you’ll certainly stand out when you proudly display them.

Additional achievements are introduced with each new World of Warcraft content update.

Mists of Pandaria expansion, most achievements will become Account-wide achievements and not tied to a specific character. The exact details of the conversion are still being worked out.[1]

Smaller status popups will appear showing progress toward a part of larger achievments.[2] 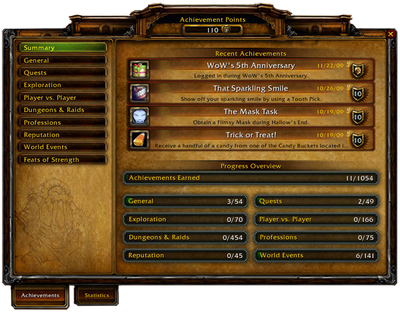 ) in the micro menu at the center of your main action bar. Click that button to bring up the achievements window or use the default bound key of Y.

The top of the window displays the total number of points you’ve received for completing achievements. Below, each achievement appears with its name, description, point value, the completion date, and a progress bar (if applicable). Some achievements expand to display a list of individual components, highlighted to show which parts you’ve finished. You can also designate which achievements to track as you play, similar to the existing quest tracker. An important design goal is to provide players with everything they need to know to unlock an achievement.

Types and categories of achievements

World of Warcraft's achievements come in several varieties. Some simply require specific actions to unlock, such as getting a haircut or defeating a member of each race in your opposing faction in PvP. Others involve a progress bar and require you to do something several times — such as give out 10 hugs. Some achievements are progressive; for example, once you complete an achievement to collect 10 vanity pets, you might next be asked to collect 25. Finally, meta achievements unlock when you complete other achievements — unlocking all World Exploration achievements (see below) unlocks a World Explorer meta achievement. Some achievements, including those that involve quests, honorable kills, items currently in your possession, skills (including professions), exploration, and reputations, are applied to your character retroactively.

To help keep track of all the different achievements you can unlock, players find the following categories in the achievements window:

Those not listed in the Progress Overview...

Feats of Strength represent the past glories of Azeroth, and as such, players will find them very difficult — if not impossible — to earn. They’re worth no points, and unlike normal achievements, unearned Feats are not displayed in the achievements interface. Feats include old-world player-vs.-player ranks, obtaining rare mounts, special titles, and more. Feats of Strength are awarded retroactively (that is, they are immediately granted to your character if you qualify) since many of them are impossible to earn in Wrath of the Lich King.

Although completing achievements does not give characters any benefits for combat or skills, certain achievements do grant the character a vanity pet, a vanity item, a very fast mounts, a new tabard or a new title.

New characters are not able to see or use the Achievements system until they are level 10.

However, plenty of Achievements are obtainable prior to level 10 (such as opening an account bound companion like Core Hound Pup), and earning one will unlock the achievement interface no matter what level.

By character and realm

Achievement link generator Generate achievement links for yourself, even if you haven't officially earned them! (powered by Wowhead)

WoW Insider Mists of Pandaria beta: New achievements weave together exploration and lore by Anne Stickney May 11th 2012 at 9:00AM

WoW Insider The OverAchiever, a series of blogs by Allison Robert since early 2009

Random Ravings of Warcraft Achieve this by BBR 21 July, 2008