Once the mighty kingdom of Ahn'Qiraj, this zone includes the majority of the Ahn'Qiraj lobby, all of the Ruins of Ahn'Qiraj, and the above-ground area of the Temple of Ahn'Qiraj. In addition, there is an area in the corner south and west of Ossirian and Ayamiss, respectively, that has a statue and is included in the zone's map area.

Cataclysm beta build 12942, there is an invisible wall just past Skeram's room preventing entry to the Temple itself. The zone is only textures, only a few NPCs or interactive objects. Silithus continues past the Scarab Wall about halfway to the meeting stone.

Mumper confirmed on September 13th via Bluepost that the Ruins of Ahn'Qiraj will be treated as a 10-man raid for the purposes of guild achievements. The dungeon will not be rebalanced for level 85 players.[1]

This huge area, littered with ruins, lies in the southwestern tip of Kalimdor.

Ahn'Qiraj: The Fallen Kingdom is the location of two raid dungeons, the Ruins of Ahn'Qiraj and the Temple of Ahn'Qiraj. 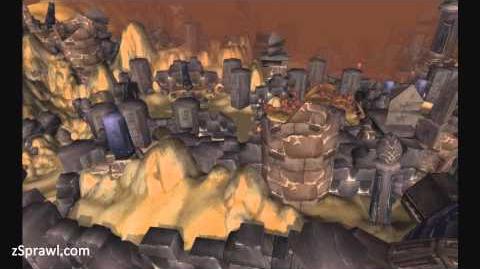 Currently a few Silithid occupy the ruins, but they are untargetable and will not attack.