Not to be confused with the Akhenet Fields in Uldum.

Ahn'kahet: The Old Kingdom (also referred to simply as Ahn'kahet or The Old Kingdom) is an instance located in the Dragonblight on the icy continent of Northrend. The huge underground city serves as home to remnants of the once magnificent Nerubian Empire.

Ahn'kahet is one of the sections of Azjol-Nerub, the others being the Inner Kingdom and the Upper Kingdom. The city is controlled by Undead nerubians and Yogg-Saron's faceless ones, with a presence of the Twilight's Hammer clan.

The area known as the Old Kingdom lies deep below the surface of Northrend, and is the original location of Azjol-Nerub. The nerubians preferred to stay well below surface level. This area has not been well maintained because the Scourge had not descended this far until very recently. By the same token, that meant they hadn't looted as much either. It was easier to avoid the Scourge by staying to these lower levels. Most of the nerubian rebels lived down here,[1] though with the recent Scourge incursion it is unknown if they still survive. 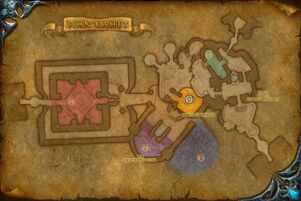 There are two quests and two level 80 daily.