WoWWiki
Register
Don't have an account?
Sign In
Advertisement
in: Articles to clean up, Midsummer Fire Festival, Level ?? NPCs,
and 6 more
English

Ahune is a frost elemental lord in Neptulon's service. The Twilight's Hammer plan to have him battle Ragnaros to start an elemental war on Azeroth.

During the Midsummer Fire Festival, players encounter Ahune by entering a special variation of the Slave Pens instance. A player queues for the special instance through the Dungeon Finder or by talking to a particular event NPC in a major city. Entering the instance in this way places the party in the second room of the Slave Pens, near an Ice Stone. The Ice Stone is then activated to summon Ahune.

Ahune is immune to frost. Players can continually queue for Ahune, but will only receive the

[Satchel of Chilled Goods] once per day. Those who kill Ahune for the first time will receive Shards of Ahune, which begins a quest. Make sure to click on the item to start

[65] Shards of Ahune before leaving the area, as the quest NPC is Luma Skymother inside the instance.

This section concerns content that is out-of-date. Reason: Update with latest abilities.

The base idea is simple: Kill adds until he submerges and nuke him down. Ahune will start by summoning an Ahunite Hailstone, an elite frost elemental that will need to be tanked. It has a Chilling Aura, which applies a stacking DoT effect to everyone in close to it. Ideally, only melee classes will be affected by it. Ahune also continually spawns smaller water elemental adds that have a small amount of hp (about 13k), but hit quite hard on cloth and tend to attack whoever is on top of the global threat (which will most likely be a healer). These should be killed as fast as possible. Ahune himself only takes 25% damage during this phase. While ranged can DPS Ahune freely (albeit weakly), anyone entering melee range with Ahune will suffer a large amount of frost damage and be knocked back a significant distance. Phase 2 starts approximately 90 seconds later.

Note that all the adds are immune or substantially resistant to frost effects. Death knights may need to alter their tanking strategies on this fight.

Ahune will submerge and his Frozen Core will become vulnerable. Ahune continues casting Ice Spear during this phsae, but will otherwise not attack or spawn adds, even when players get within melee range. He will remain submerged for 30 seconds; everyone including the tank should dps the core as hard as possible, taking care to avoid the ice spears and not slip on the icy patches. When Ahune emerges, he will return to phase 1 and begin the cycle again. Each time he restarts the cycle he will spawn more adds, however, so you will need to kill him before the adds overwhelm your group.

Like other holiday bosses, Ahune's drops can be sold but not disenchanted.

The following items only dropped from the level 85 version of Ahune (2011-2012), and are listed here for historical purposes only.

The following items only dropped from the level 80 version of Ahune (2010), and are listed here for historical purposes only.

The following items only dropped from the level 70 version of Ahune (2008-9), and are listed here for historical purposes only.

When first added, Ahune appeared in the standard Slave Pens instance, in both normal and heroic versions. The 2010 revision to the event (increasing Ahune to level 82) moved it to a specialized instance where the normal Slave Pens mobs do not appear. 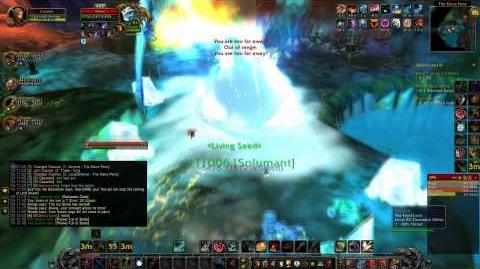