is located southwest of the town of Duskhaven in Gilneas. It seems to have served as a stables/corral of sorts, judging by the horses and sheep. The storm cellar at the Farmstead is where a few of the Gilneans have taken refuge after the Forsaken assault. It is fortunate that they have chosen such a safe place to weather the siege, as the Cataclysm strikes unexpectedly, leveling the house above them.

The Allen Farmstead and its lands disappear altogether when it is hit by stronger earthquakes. What remains of the area is a deep trench filled with water.

Added after Leader of the Pack 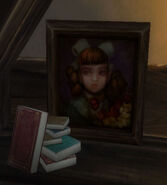 The Farmstead home destroyed after the Cataclysm.