Alleria Windrunner (nicknamed "Lady Sun" by Vereesa)[1] was the ranger-captain of Silvermoon who led her rangers under the Alliance of Lordaeron during the Second War. She was also the head scout of the Alliance Expedition to Draenor. Alleria and her lover Turalyon disappeared after the planet was torn apart and have not been heard from for many years.

Alleria Windrunner is the eldest of the Windrunner sisters, all of whom have served Quel'Thalas and the Alliance with distinction. She also had a younger brother. Alleria always wore a necklace given to her by her parents, an exquisite piece containing an emerald, a ruby, and a sapphire.[2] (BtDP 199)

When the Horde invaded Lordaeron, King Terenas Menethil II called upon the ancient debt the Sunstriders owed to Anduin Lothar. The ruling council of Quel'Thalas did not see the Horde as a true threat to their civilization so they decided to not send troops to the Alliance of Lordaeron. Alleria was one of the few in Quel'Thalas who believed that the Horde might pose a threat to the elves, and consequently chose to lead her rangers to Southshore to join the Alliance of Lordaeron, despite not being ordered to do so.[3] (ToD 118)

Alleria worked closely with Turalyon and Khadgar in the campaign to expel the orcs from Lordaeron. Upon learning that the Horde was marching towards Quel'thalas, Alleria led the Alliance army to the defense of Silvermoon, briefly reuniting her with her sister Sylvanas and comrade Lor'Themar Theron. Though they were successful in repelling the Horde invasion, it came at a terrible cost: eighteen of her kin, including her younger brother, Lirath, were killed. Devastated, Alleria sought comfort in the arms of Turalyon, but ultimately, she chose to dedicate herself to revenge.

To the horror of her friends, Alleria came to see the orcs as little more than vermin to be exterminated.[2] (BtDP #?))​​ Alleria hunted down the Bleeding Hollow Clan whom had so far escaped capture. When the orcs rallied behind Ner'zhul and the death knights, Alleria agreed to lead her rangers beyond the Dark Portal into Draenor to exact vengeance for Quel'Thalas and stop the Horde once and for all. Before she left, she had her necklace melted down into three pieces.[2] (BtDP 198) She kept the emerald for herself and sent the ruby to Vereesa and the sapphire to Sylvanas, using Verana, her lieutenant, as the emissary. On Draenor, Alleria realized that there was more to the Alliance Expedition's struggle than her quest for vengeance. The final event that caused her to let go her hate and mourn for her loved ones was when Turalyon ordered her to stay back. Alleria found that she could not let go of the young human to his death and rekindled her relationship with Turalyon, much to the relief of their friends.[2] (BtDP 247)

Following the fall of Hellfire Citadel, Alleria sent most of her forces with Danath Trollbane, Thalressar and Kurdran Wildhammer to pursue Ner'zhul, but herself accompanied Khadgar and Turalyon to retrieve the Skull of Gul'dan from Deathwing. She later aided in defending Khadgar when he finally closed the last Dark Portal to Azeroth, after which Draenor itself was sundered in a fiery cataclysm, sacrificing her way home. Alleria, along with her surviving allies, leapt into the Twisting Nether to avoid dying with Draenor.[4] (S&L 57,58)

After the damage that changed Draenor into Outland had been done, Alleria, Turalyon, Khadgar and the rest all returned to the orcs' homeworld. They set out to return to Honor Hold, which was still standing even after the chaos that had occurred on Draenor. However, although Khadgar, Danath Trollbane, and a few other heroes from this time are present in Outland, and players may interact with them, neither Alleria nor Turalyon are anywhere to be found, leaving their current whereabouts a mystery until they were later found in the Broken Isles.

The details of how and when Alleria left Outland aren't clear, but it was long suspected that she followed Turalyon in pursuit of the source of the Burning Legion's power. For a long time both of them were thought to be dead, but hints of their survival and continued success were hinted at by rumors from demons.

Alleria's status and whereabouts are unknown, as told by Danath Trollbane to her son Arator the Redeemer, and she has yet to appear in World of Warcraft. However, quite a few references to the legendary ranger can be found.

Alleria and Turalyon make their in-game appearance at the ancient elven city of Suramar on the Broken Isles.[5][citation needed] Alleria appears in-game in Patch 7.3, on arrival to Argus.[6] Alleria acts as the right hand to Turalyon in leading the Army of the Light and often advises on strategy. Overheard conversations show that she is very angry upon hearing that her sister is now Warchief of the Horde, but she may not be aware of the radical transformation Sylvanas has undergone since she last saw her.

Later, she and the player meet up with the mysterious Locus-Walker, an ethereal who taught her everything she knows about the Void.[7] Both serve as guides to the player during the Seat of the Triumvirate instance. When L'ura is slain by the players, Alleria siphons the entity's powers and gains a voidform. When spoken to on the Vindicaar after the Crown of the Triumvirate is completed, Alleria states that she is in control of her new form, capable of turning it off and on of her own will. Later, she would find more Blood Elves capable of harnessing this power, later referred to as void elves.[citation needed]

After the War of the Thorns, Alleria and her troops arrive during the Battle for Lordaeron with Gelbin Mekkatorque and gnome reinforcements. Pushing through, she accompanies Anduin Wrynn, Genn Greymane, and Jaina Proudmoore to confront Sylvanas in order to make her pay for her genocide of the night elven people. Unfortunately, Sylvanas escapes, unleashing a blight throughout the Undercity that would have killed her accusers, had Jaina not teleported them all to safety.

Alleria is a superb forest fighter who prefers solitude and travels with others only when forced to do so. She speaks infrequently and only in short sentences. She shows passion only where orcs are concerned, hunting them ruthlessly and without mercy.[4] (S&L 58) However, much of this personality dissolved when she rekindled her relationship with Turalyon. [2] (BtDP #?))​

In battle Alleria travels in forests whenever possible and prefers to strike from hiding — especially when attacking orcs, who she believes have no honor and therefore can be killed in any way she sees fit. In battle, she uses her great speed and mobility to weave in and out of the fight, taking point blank shots with maximum efficiency. If forced into melee in a situation where she absolutely cannot fire her bow, she swings it as a quarterstaff. She wields no other weapons — Alleria's special composite bow was her father's, and she employs it exclusively.[4] (S&L 58) [3] (ToD 200,220)

Renowned Troll Hunter of Quel'Thalas. Lead Scout and Intelligence Agent for the Alliance Expedition that marched into the orc homeworld of Draenor. Presumed deceased.

Model for Alleria Windrunner in Patch 7.3

From Hearthstone: Heroes of Warcraft 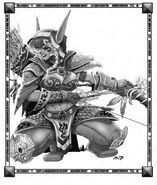 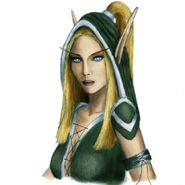 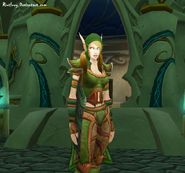 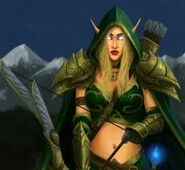 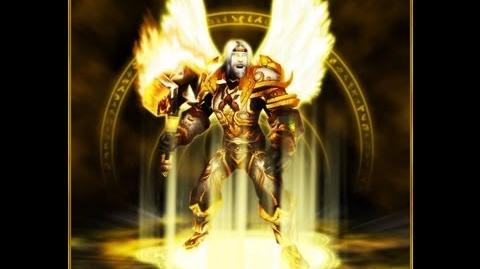 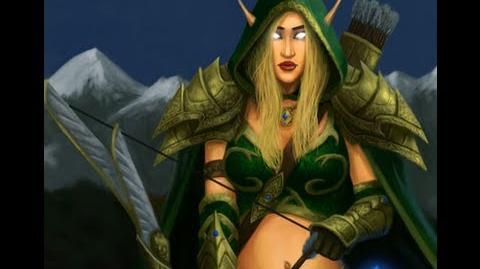 See this subject on the Hearthstone wiki: Alleria Windrunner