A terrible and costly mistake you have made. It is not my time, mortals. (TCG)

Anachronos the Ancient is the child and heir of Nozdormu the Timeless One and as such is a prominent member of the bronze flight.

During the War of the Shifting Sands, Fandral Staghelm sought the aid of the elusive bronze dragonflight. Initially, the Bronzes refused, but their decision was reversed when the brazen Qiraji attacked the Caverns of Time. Nozdormu's heir, Anachronos, agreed to enlist the bronze dragonflight against the marauding Qiraji.

Even with the might of the dragons backing them, however, the sheer numbers of the Qiraji and silithid proved overwhelming. And so Anachronos called upon the progeny of the remaining flights: Merithra, child of Ysera of the green flight; Caelestrasz, child of Alexstrasza from the red, and Arygos, child of Malygos from the blue.

The dragons and winged Qiraji clashed in the cloudless sky above Silithus. It is rumored that the dragons flying above the ancient city from which the Qiraji emerged saw something distressing there; something that hinted at a more ancient, terrifying presence behind the onslaught of the insect race. It was this revelation that spurred the dragons and Staghelm to hatch their final, desperate plan: to contain the Qiraji within the city, to erect a barrier that would confine them until a more hopeful stratagem could be devised.

The final push to the city began. High above, the dragons were making short work of the insect soldiers. As one the night elves and dragons formed a moving wall which pressed the Qiraji back toward the city of Ahn'Qiraj. But near the city gates, the tide turned, and it was all the combined forces could do to hold the line. To push any further would be impossible. Merithra, Caelestrasz and Arygos decided to push into the city and hold the Qiraji back long enough for Anachronos, Fandral, and the remaining druids and priestesses to create the magical barrier. And so the three dragons and their companions flew headlong into the Qiraji legions, into the city where they hoped their sacrifice would not be in vain.

Outside the gates Fandral called upon the druids to focus their energies as Anachronos summoned the enchanted barricade. Beyond the gates, the three dragon progeny succumbed to the overwhelming forces as the Qiraji surged forth. The barrier erected itself before their eyes, rock and stone and roots from beneath the sands emerging to create an impenetrable wall. Even the winged soldiers who attempted to fly over the barrier met with an invisible obstruction that they could not pass. The Qiraji who remained outside the wall were quickly slain. The corpses of Qiraji, night elves and dragons littered the bloody sands.

Anachronos motioned to a scarab scuttling below his feet. The creature froze, then flattened out, transforming into a metallic gong. Stones shifted into place near the wall, creating a dais where the gong was finally placed. The great dragon then proceeded to the severed limb of one of his fallen companions. He held the appendage and, after a series of incantations, the limb morphed into the shape of a scepter. The dragon told Fandral that should any mortal ever wish to pass the magical barrier and access the ancient city, they need only strike the scepter against the gong and the gates would open. He then handed the scepter to the Arch-Druid. Fandral looked down, his face twisting in contempt, still mourning his son's recent death.

Lord Staghelm, in a fit of rage and grief, shattered the Scepter of the Shifting Sands. Anachronos was taken aback as the Night Elf stormed off, damning Silithus, the Qiraj, and the dragons for his son's death. Disappointed, Anachronos took the four shards of the sceptre and entrusted each shard to a member of the four flights, including himself. From the red he chose Vaelastrasz, from the blue he chose Azuregos, and from the green, Eranikus.

Now, 1000 years later, he is still guarding the Caverns of Time in Tanaris. Anachronos now seeks to finish the war with the Qiraji. Little did he know back then that all three scepter guardians, whether by agents of the Old Gods or betrayal by those that would call them friend, would fall to tragedy. His agent, Baristolth of the Shifting Sands, seeks a mortal champion to recombine the scepter and open the Gates of Ahn'Qiraj. A transcript of the final events of the war as shown to Anachronos' chosen champion can be found in the quest A Pawn on the Eternal Board.

Anachronos is a level ?? quest giver located in the Caverns of Time in the contested territory of Tanaris. He will not speak to you unless you are neutral with his faction, the Brood of Nozdormu.

[The Scepter of the Shifting Sands] quest chain

Signet Ring of the Bronze Dragonflight

[Atiesh, Greatstaff of the Guardian]

Anachronos has relocated within the depths of the Caverns of Time, the reason being is currently unknown.

That Anachronos has been established as the heir of Nozdormu is unusual, though not truly surprising. Nozdormu knows exactly where and when he will perish, and as such, would need to appoint a successor to his sacred mission well in advance. The other Aspects would have less of a need for directly designated successors. That Anachronos has been named an heir implies that his mother is likely Soridormi, Nozdormu's Prime Mate. 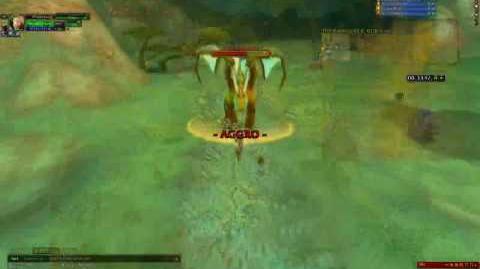