Were you looking for the movie version,

Anduin Lothar or the character in Cycle of Hatred,

Kingdom of Azeroth (Brotherhood of the Horse)

Knight Champion of Stormwind, Regent Lord of the Kingdom of Azeroth, Supreme Commander of the Alliance

Sir Anduin Lothar, the Lion of Azeroth, was the last true descendant of the ancient Arathi bloodline, a knight champion of the Kingdom of Azeroth (later known as the Kingdom of Stormwind) during the First War, and the supreme commander of the armies of the Alliance of Lordaeron during the Second War. He perished in combat at the base of Blackrock Mountain just before the end of the Second War and the closing of the Dark Portal. He is considered one of the greatest warriors of all time.

King Varian Wrynn, who perished at the hands of Gul'dan in front of the Tomb of Sargeras, named his son, King Anduin Wrynn, after him.

Lothar grew up in the court of Azeroth as a childhood friend of both the Prince, Llane Wrynn, and Medivh.[2] The trio shared many adventures in the Azerothian wilderness in their youth. Upon coming of age, Lothar joined Stormwind's military, was later knighted, and rose quickly to the position of "Armsman of the Brotherhood of the Horse", eventually becoming the leader of Stormwind's armies.

When the orcs first arrived in Azeroth and launched their initial attack on Stormwind Keep, Lothar aggressively advocated taking the battle to them. King Adamant Wrynn III shared Lothar's view and therefore pledged to rid his beloved land of the orcs. He died before that pledge could ever be fulfilled and was succeeded by his son, Llane Wrynn I. The new king continued his father's work and the battles against the orcs raged on. During this time, the invaders were held back to the Swamp of Sorrows.

At one point during the war, the Tome of Divinity, a book of great value to the Clerics of Northshire, was stolen by a rogue band of ogres, led by the ogre lord, Turok. Lothar led an expedition into the ogres' hideout, the Deadmines in Westfall, but they were completely overrun and held captive to be slowly killed. Lothar remained imprisoned within the caves for twenty months before he and his few surviving men were saved by Azerothian troops. He retrieved the Tome of Divinity and returned to Stormwind, safeguarding the book at Northshire Abbey. Reintroduced to the war, Lothar continued leading the forces of Stormwind.

Lothar was shocked when the wizard, Khadgar, the apprentice to his old friend, Medivh, arrived to tell him that the great mage had betrayed everyone by summoning the orcs into Azeroth. After heated discussion in Stormwind, Lothar personally led a force to storm Karazhan to kill Medivh. The band of troops, along with Lothar, Khadgar, and the half-orc, Garona, descended into the lower tower and confronted the mad guardian. Khadgar managed to stab Medivh in the heart, and Lothar removed his head with one swipe from his greatsword.[3]

Unfortunately, the death of Medivh could not stop the rampage of the Horde. The war was starting to turn against Azeroth as the orcs learned from their earlier mistakes under the leadership of Warchief Blackhand. King Llane was assassinated by the Horde spymistress, Garona, and the city of Stormwind was sacked. Lothar, knowing that the Kingdom of Azeroth had been lost, decided to save what remained of his people. He gathered the tattered remnants of the army and as many civilians as he could and led them in a desperate retreat across the Great Sea, eventually landing upon the shores of Lordaeron.

Once at the court of King Terenas Menethil II of Lordaeron, Lothar told his dire story to everyone who would listen. Lothar's eloquent pleas ultimately brought the human kingdoms together for an emergency council, where his friend Terenas' masterful politics created the Alliance of Lordaeron. Having been contacted by Terenas with Lothar's tale, the normally aloof high elves sent a contingent of their forces, knowing they could finally pay off their debt to the Arathi bloodline for saving them during the Troll Wars. The Wildhammer dwarves of Aerie Peak were attacked by the Horde as well and quickly pledged themselves to Lothar. The Alliance was later joined by the Bronzebeard dwarves and gnomes of Khaz Modan, who had been forced out of much of their lands by the Horde's advance.

Because of his great skill in warfare, experience with orcs, and because the kings of the north were not comfortable placing their troops in the command of a rival nation, Lothar - a neutral party - was named the supreme commander of the Alliance forces. He quickly named Turalyon his second-in-command, and Admiral Daelin Proudmoore, Uther the Lightbringer, and Archmage Khadgar as his lieutenants. Throughout the war, he led his forces from battle to battle with valor and skill. After the Horde's mysterious retreat from Lordaeron and Grand Admiral Proudmoore's victories at sea, Lothar led the armies of the Alliance to liberate much of Azeroth and Khaz Modan (meeting up with Muradin and Brann Bronzebeard), eventually breaching the Black Morass itself.

Lothar was killed at the foot of Blackrock Mountain after a force of Alliance troops he personally commanded was ambushed by the Horde. He became separated from the main body of his troops in what is perhaps the greatest battle in Azeroth's history. Amid the chaos, he was forced into combat with Orgrim Doomhammer, Warchief of the Horde; after a long and draining fight, Lothar was defeated in single combat after his sword was shattered by the Doomhammer, his skull crushed by a powerful blow from the legendary weapon.[4][5] Some believe that Ogrim did not win fairly and Lothar was killed after being ambushed by a group of Horde's warriors. Regardless, his blade fell from his dead grasp, though it did not lie for long.[6][7][8]

Doomhammer believed that Lothar's death would break the fighting spirit of his forces, but what happened was quite the opposite. After Lothar's death, his most trusted general, Turalyon, took up his shield and sword and led the armies of the Alliance to eventual victory over the Blackrock Spire's defenses; this allowed Lothar's old ally and friend, Khadgar, to later destroy the Dark Portal.

A massive stone statue depicting Lothar in his last charge where he fell in battle was built and still stands in the Burning Steppes, pointing defiantly towards Blackrock Spire. The materials for Lothar's monument had ironically been hauled by orcs put to work after the Second War.[9] Lord Lothar's legacy lives on in all the free peoples of Stormwind. Anduin Wrynn, who became king of Stormwind, bears Lothar's name.

The Alliance Expedition to Draenor, led by veterans who had fought alongside Lothar in the Second War, named themselves the Sons of Lothar "in honor of the greatest, most selfless man we ever knew", as Khadgar relates it. The Monument of Remembrance in Honor Hold was also built as a memorial to everything he fought for.

A belt that had once belonged to Lothar came into the possession of the Crimson Ring, a group of slavers and gladiators in Orgrimmar, and was kept in their special armory in the Hall of Legends. The belt was claimed by Varian Wrynn, then known as the gladiator Lo'Gosh, when he was allowed access to that armory.

At some point, Lothar returned to Stormwind for a brief stay and received the gift of a rifle from a dwarven gunsmith. He lost it later, presumably when he was returning to his forces during The First War.

Lothar was a strong and highly charismatic leader, capable of commanding attention and radiating determination and conviction to those serving under him. Though most often appearing emotionless, he was deeply passionate about his friends and countrymen. His loyalty was first and foremost to the people of Azeroth, fighting with the full extent of his considerable skills in battle in hopes his homeland would be reclaimed.[4]

In combat, Lothar fought best as part of the cavalry, charging into his enemies with Quel’Zaram. He preferred to outmaneuver enemy commanders, retreating when prudent. He was at his most useful when commanding others. Following Medivh's betrayal, Lothar developed a profound respect for the power spellcasters commanded, targeting them first in battle by hammering through lesser warriors to reach them.[4]

Quel'Zaram was one of Lothar's greatswords. He discovered while on his youthful adventures with Llane Wrynn and Medivh. The sword impressed Medivh and he dubbed it Quel'Zaram, Thalassian for "high blade". Lothar also wielded the Great Royal Sword of Stormwind. It was shattered during the Second War, but later taken up by Turalyon. The whereabouts of both weapons are unknown.

In World of Warcraft, [Ashkandi, Greatsword of the Brotherhood] can be obtained when slaying Nefarian, Lord of Blackrock. This is also believed to be a sword of Lothar's, as "Brotherhood" is assumed to refer to Lothar's order, Brotherhood of the Horse. The hilt is inscribed with the initials "A.L.", assumed to mean Anduin Lothar. However, judging by its looks, the sword has most likely been altered by Nefarian from its original appearance. Surprisingly, when this weapon was given a description in the Monster Guide, no connection to Anduin Lothar was made.

Warcraft II game events of Assault on Blackrock Spire, Lothar was lured into a trap while attempting to parlay with the orcs at Blackrock Spire. The player was sent to siege Blackrock Spire, assuming the worst had happened to Lothar as they had heard nothing from him in days. Seconds after the level begins, Lothar and his troops are slaughtered by a large group of ogres and trolls, and there is nothing the player can do to save him. 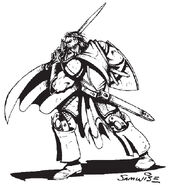 Lothar during the First War 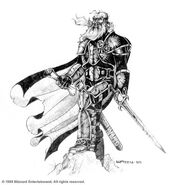 Lothar in the Second War 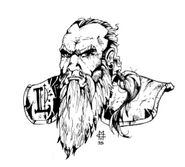 Lothar in the Second War

Lothar in Warcraft I

Lothar in Warcraft I 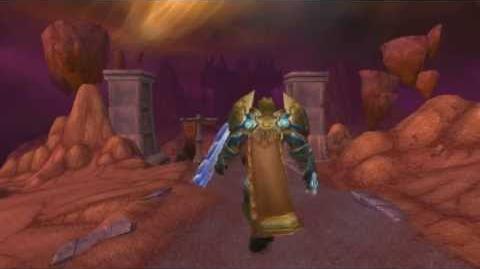