For the statue in his honor, see Antonidas Memorial.

Antonidas was the leader of the Kirin Tor of Dalaran and teacher to the archmage Jaina Proudmoore. He was killed by Arthas during the invasion of Dalaran.

Antonidas was but a mere boy when he became an apprentice to one of the Kirin Tor. He was a tenacious learner, poring over books in the magical libraries of Dalaran. After only a few short years of studying under the sect, Antonidas had outclassed his peers and earned their admiration, as well as the respect of his elders. At the age of 12, Antonidas' thesis, "The Ramifications of refined Reverse Time Travel Phenomena into Quantifiable Magical Practice", earned him the Kirin Tor Sash of Supreme Acumen, the youngest ever to receive the award. Shortly thereafter the Ruling Council offered him official placement in the Kirin Tor Advanced Research and Illumination Sect, also the youngest to receive an official invitation.

As the mage grew older, he continued to learn and hone his abilities. His natural talent for defensive magic and wisdom beyond his years made Antonidas an ideal candidate for a position on the Council of Six, which he eventually attained. Antonidas proved not only wise and fair, but infinitely regimented in goal to become more knowledgeable. He quickly became one of the dominant voices of Dalaran.

Before the Second War, leaders of each of the Azerothian nations met in Lordaeron to discuss the threat of the orc invasion. Archmage Antonidas attended the summit on behalf of the Council of Six, pledging loyalty to the Alliance on Dalaran's behalf. He also monitored the progress of the young but extremely talented mage Khadgar, who had served as Medivh's apprentice during the first war. In the aftermath of the Second War, Antonidas promoted Khadgar to the rank of archmage and placed him in a position of authority over the mission to enter the Dark Portal and investigate Draenor.[1]

A few months following the war, when Teron Gorefiend infiltrated the Violet Citadel, Antonidas rushed to intercept him. He found the death knights in the Arcane Vault, Dalaran's store for its most precious of relics. Alongside Krasus, Kael, and Sathera, Antonidas battled against the death knights who had come to steal the Eye of Dalaran for Ner'zhul. Sathera was killed, and the death knights escaped atop the backs of Deathwing and his black dragons.[2]

Lethargy of the Orcs

Main article: Lethargy of the Orcs

After the Second War many orcs were rounded up and placed into internment camps. Some of the Alliance leaders speculated that it would be best to simply kill all of them off while they were weak. Others concluded the orcs could be kept as slaves. Antonidas posed a different hypothesis. The archmage published several theses on his research:

"The Causality of War: A Comprehensive Study on Orc Lassitude."

"The Contrast of Orc Tradition, Sociology, and Psychological Practices from Before and After the Second War."

"Empirical Study on the Formulation and History of High Profile Fel Magics, and their Relation to the Orc Race."

Researching what little he could find of orcish history, Antonidas learned that the orcs had been under demonic power and warlock magics for generations, granting the brutes unnaturally heightened strength, endurance and aggression. He speculated that the orcs had been corrupted by demonic powers even before their first invasion of Azeroth. Antonidas theorized that the orcs’ communal lethargy was not actually a disease, but a long-term racial withdrawal from the volatile warlock magics that had filled them with bloodlust. Though the symptoms were clear, Antonidas was unable to find a cure for the orcs’ present condition, and many fellow mages and notable Alliance leaders argued that finding a cure for the orcs would be an imprudent venture. Left to ponder the orcs’ mysterious condition, Antonidas’ conclusion was that the orcs’ only cure would have to be a spiritual one.[3]

Though his failing health prohibited him from spending too much time away from his beloved city, his apprentice, Jaina Proudmoore, served as his eyes and ears in the world. Antonidas looked forward to the day when he would hand his power and mantle of leadership over to Jaina, whom he felt would make a most impressive archmage.[4]

When the wizard Kel'thuzad began to experiment with the arcane art of necromancy, threatening the safety and reputation of Dalaran, Antonidas put a stop to it, confiscating his holdings and banishing Kel'Thuzad from Dalaran.

Unfortunately, Antonidas grew cautious as he got older; Antonidas, like many prominent figures in the Alliance, was met by the mysterious Prophet before the invasion began. When the Prophet warned him about the upcoming invasion, Antonidas did not heed the stranger's advice to personally investigate. When the Prophet warned him that he must journey west, Antonidas was heedless, believing the Prophet to be nothing more than a magical madman. Despite Jaina's instinct about the Prophet, Antonidas instead chose to focus attention on the plague sweeping across the north. He, like many of the Kirin Tor, knew that it was a great threat, and that it should be taken very seriously. However, Dalaran's plea for quarantine went unheard by the ears of Alliance officials.

Instead he sent his finest pupil Jaina Proudmoore to investigate, who accompanied the young paladin Prince Arthas along the first leg of his journey to Northrend.[5] The ensuing tragedy would ravage the mind of Arthas, and destroy the great city of Stratholme. Antonidas continued to study the plague from afar until finally it came to his doorstep. The Scourge, led by Kel'Thuzad and Arthas, had come to claim the Book of Medivh. While Antonidas did his best to protect Dalaran, creating a protective field around the entire city that would inflict heavy injury upon any undead creature that entered it, it was not enough, however, and Prince Arthas led his undead minions into Dalaran and then into the Violet Citadel itself.[6]

Nevertheless, Arthas sacrificed many of his minions to strive deep into the Citadel, and finally, he murdered Antonidas and claimed the book in the name of the Lich King. He was 72 years old at the time of his death. With his death, all the auras of the archmagi dispersed and the spirits of the dead archmagi went to find peace in the dungeons of Dalaran. Although the forces of Dalaran fought on desperately, the City of Dalaran was obliterated by the demon lord Archimonde soon after Antonidas' death.

His spirit lingered even after the city's destruction for some time, continuing to fight what he believed to be the invading undead forces. When the blood elf Prince Kael'thas was fleeing the dungeons, he found the ghosts of Antonidas and several of his kindred, and finally released them, allowing them peace after so many months.[6]

Archmage Antonidas, Grand Magus of the Kirin Tor. The great city of Dalaran stands once again - a testament to the tenacity and will of its greatest son.

Your sacrifices will not have been in vain dearest friend.

With Love and Honor.

He was the leader of the Kirin Tor.[7] Antonidas was the true ruler of the Kirin Tor and his wise, fatherly countenance became the sect's public face.[5] He was also implied by Brann Bronzebeard to be the monarch, one of the seven "...human kings...of the Eastern Kingdoms...", representing Dalaran, who met to form the Alliance of Lordaeron.[8][9] Other sources such as Warcraft III manual and Day of the Dragon call Dalaran a "kingdom" as well. His leadership is further confirmed in Tides of Darkness, although he is said to be a non-king.[10] Antonidas was also known as "Head of the Kirin Tor of Dalaran", and was indeed head of the conclave of wizards that ruled over the magical nation,[4] and leader of The Six, the highest council in Dalaran whom often met in the Chamber of Air. 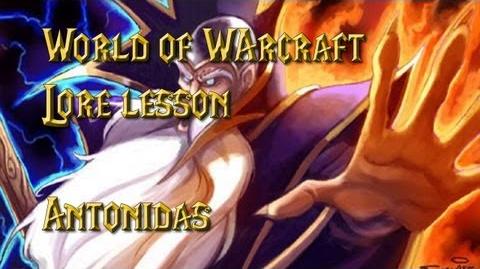