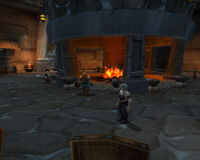 (also known as Building A3[1]) is the first settlement of significance encountered by starting dwarves. It lies north within Coldridge Valley and has a set of trainers and some quest givers, as well as a few vendors.

The central structure of Anvilmar houses a large forge, although there are no tradeskill trainers. It is named after the great king Modimus Anvilmar, the High King of all dwarves before the War of the Three Hammers.

At the moment, Coldridge Valley is heavily populated by troggs, and a recent earthquake has caused them to lose their homes. The troggs strongly believe the dwarves of Anvilmar are to blame for the destruction, so are waging a constant war against them. Due to this combat and the earthquake, all civilians have been locked down within the structure.