Southeastern Lordaeron
The Arathi Highlands are located in southeastern Lordaeron, east of Hillsbrad Foothills and south of the Hinterlands. It is a flat but craggy region that has traditionally been the home of the humans of Arathor, who gave the region its name. The main hubs of activity are now Refuge Pointe and Hammerfall, which houses bases for Alliance and Horde, respectively. The large city of Stromgarde lies in ruins to the southwest, and pockets of Syndicate resistance dot the land. The Boulderfist Ogres also infest Arathor, and prove to be a constant threat to the Alliance, Horde, and Syndicate factions vying for supremacy.

The Syndicate, Boulderfist ogres and the beleaguered human defenders of Stromgarde battle for supremacy in this gray, dismal realm. Prince Galen Trollbane leads the human defenders, and his mighty city of Stromgarde is a ruined battleground where the three factions wage guerrilla war. The Trollbane family’s holdings include several ancient human artifacts, and a group called the Caretakers protects and preserves the most important pieces. To the south is the Thandol Span, a massive dwarven construction that bridges the canal between Lordaeron and Khaz Modan.[1] Due to the bridge being the only land connecting path from Lordaeron to Khaz Modan, the Arathi Highlands have become quite a hotspot for trade between the separated continents.

The Arathi Highlands were once the cradle of Human civilization, as it marks the place where the Empire of Arathor was founded and where the first real contact between elves and humans was made, during the Troll Wars. From the great city of Strom, the Human Empire controlled nearly all of the eastern lands. After the Empire's collapse, the city of Strom was largely abandoned save for a contingent of the Imperial Guard. These Guardsmen founded a new martial kingdom known as Stromgarde, establishing their capital in the old city of Strom. Over time, they also built a village (later known as Hammerfall) further to the east. During the Second War, the forces of Stromgarde, now ruled by Thoras Trollbane, were an instrumental part of the Alliance's ground forces. Despite this, the Arathi Highlands, and Stromgarde itself was overrun by the Horde.

After the Second War, Stromgarde was rebuilt, and the former village that was to become Hammerfall was converted into an internment camp to hold the hated Orcs. The nation managed to escape the Plague of Undeath but was soon afterward overrun by the Syndicate and Ogres. The remnant of the army was forced to flee the city and take refuge in a small canyon to the north, in what is now known as Refuge Pointe. Now, four years after the Third War, the area has become a battle zone between many different factions. The Alliance fights to aid the former nation of Stromgarde in recapturing its capital and reestablishing control over the region. The Horde, now in control of the internment camp that once held them prisoner (naming it Hammerfall in honor of the fallen warchief Orgrim Doomhammer), is attempting to establish a forward base to protect its new allies against Alliance attack. The Syndicate is also in the area, trying to claim yet another territory for its jealous nobles. Finally, the Ogres and Forest Trolls in the region are trying to drive out all others and establish a permanent settlement for themselves.

Unlike its neighboring regions of Hillsbrad Foothills and the Wetlands, the Highlands were spared during the Cataclysm. Very little has changed. The Horde, flush from victory within Hillsbrad, have pushed slightly into the Highlands and have established a camp near the border. On the Alliance side, the dwarves have burrowed a deep pass through the mountains north into the Hinterlands, and now a clear path runs from behind Stromgarde Keep to Faldir's Cove. The dark iron dwarves have abandoned their camp near Thandol Span, retreating within the structure, and now the camp is home to a friendly Dark Iron Entrepreneur.

Arathi Highlands serves as a meeting place between humans and Forsaken wishing to reunite with loved ones. The meeting takes place under the eyes of Anduin Wrynn and Sylvanas Windrunner and their respective troops, brokered by Alonsus Faol and Calia Menethil.

The meeting ends in tragedy as Calia's identity is revealed while attempting to assist Forsaken in defecting. The Horde archers open fire, killing the Forsaken on the field, and Sylvanas personally slays Calia.

The Arathi Highlands have a higher elevation than Khaz Modan's Wetlands, but otherwise the geography is similar. To the north is Thoradin's Wall, now collapsed and gaping wide. South is the Thandol Span, which bridges the gap between Lordaeron and Khaz Modan. Mountains to the east prevent easy access to the sea, and the Highlands' western coast is bleak, windswept and cold.[2]

The Arathi Highlands are an area of grassy land in Southeastern Lordaeron. Notable features include the great circles of binding, which are protected by elementals and used to keep some unknown entity imprisoned. The region lies just north of the huge canyon running between the highlands and the Wetlands to the south, which can only be crossed by the Thandol Span. The area is home to the ruins of Stromgarde Keep, which has been overrun by ogres and the Syndicate. The wildlife of the highlands includes giant spiders, carrion birds, and raptors.

Alliance
From Ironforge run east towards Loch Modan; take the road in the Loch north through Dun Algaz pass and into the Wetlands. Follow the road as it runs north, northeast, then west. When the road splits and heads north follow it north. You'll pass over the ruined Thandol Span and you'll be in the Highlands.

Horde
From Tarren Mill in Hillsbrad Foothills, run eastwards across the river and catch up with the main road. Follow the main road eastward until you go through Thoradin's Wall. Continue following the path for a considerable time, until you see a signed turnoff to the north to Hammerfall. Take that turn off and continue running until you get to Hammerfall.

The Arathi Highlands are home to several characters of note. At Refuge Pointe,

Skuerto seeks aid in the battle against the Boulderfist ogres. In Hammerfall,

Tor'gan attempts to raise the spirits of those who still reel from the loss of Warchief Orgrim Doomhammer. And in Faldir's Cove,

Captain Steelgut and his trusted crew seek an end to their prime threat — naga.

The Tower of Arathor 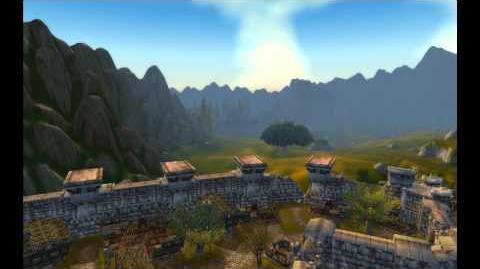