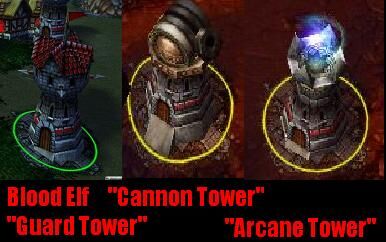 The Arcane Tower is a "magical defensive tower with the Reveal and Feedback abilities. Attacks land and air units."[1]

Arcane Towers are a Blood Elf structure. They appeared in the Warcraft III Frozen Throne Human Campaign to aid Kael'thas. It is upgraded from a Scout Tower.