An archer is one that shoots with a bow and arrow. The archer's specialty is ranged attack, and she will do everything possible to maintain her distance. Most night elf archers also use stealth, speed, and darkvision to full advantage. An archer might creep to a hiding place and wait there for hours to set the target at ease. Archers train both alone and in teams, and often concentrate fire on a single major target or on a small group standing close together. This allows them to take down tougher foes or clustered enemy commanders in a single volley.[1]

These warriors use their skill in the crossbow to deal death from a distance. They are slightly more maneuverable than Footmen, but the cost is the lighter armor they must wear. The ability to launch their deadly rain of missiles from a distance makes them a force not to be discounted.[2]

These were units in Warcraft II: Tides of Darkness, they were not specified as being "high" or "blood" or "night" as in the following game. They were upgradeable into Elven Rangers.

Out of the mysterious forests of Quel’thalas come the elven archers to aid the Alliance in its darkest hour. Descendants of the elder race of Lordaeron, these sylvan woodsmen are unmatched in their use of the bow. Unencumbered by helm or heavy armor, Archers are keen of eye and fleet of foot. These elves have long been embroiled in a bloody conflict with the hated trolls of Lordaeron and are swift to let loose a rain of arrows upon any foe, including those that attack from the skies above.[3] High elven archers helped the high elves oppose Arthas as he attacked their capital Silvermoon and Quel'thalas in Warcraft III. They are trained in High Elven Barracks.

"Archer" is a blood elf unit that is ranged. They appeared in the Warcraft III Frozen Throne human campaign to aid Kael'thas. It is produced at the Barracks.

Archers compose the first rank of the Sentinel army. These brave warrior women are expert marksmen and use the concealing forests of Kalimdor to their advantage. Their lightning-quick ambushes are legendary, for few warriors can match the proud archers' speed and cunning. Like all night elf women, archers have the ability to Shadowmeld at night.[4]

Many night elves learn to use weapons before they can walk. Some show a natural talent for archery and hone that skill. These archers are excellent hunters, but, in wartime, become critical support troops, firing upon enemies to give allies a chance to regroup and attack. Night elf archers are particularly renowned for their ambushes, especially within their own forests. They can move silently among the trees and down opponents a hundred feet away without ever being seen. The typical archer is slender but strong, with a quiet grace and the ability to shift from motionless to eye-blurring speed in an instant. She carries her bow constantly and pays it more respect than most people.[5] They are a part of the Watchers a Night Elven security group led by Maiev Shadowsong to hunt down Illidan and his forces of serpentine Nagas.

Pandaren archers often rest just beyond the infantry, using long supple bambus bows capable of taking the eye out of an orc at hundreds of yards. Pandaren archers are equipped with their bows and a variety of arrows with varying heads (broad, leaf-shaped heads for unarmored infantry, sharp, piercing heads for heavily armored opponents, and unusual "U" or "V" shaped arrowheads for dealing maximum damage at close range); they often carry short curved swords similar to shaktani warblades. Pandaren archers are skilled at long-range marksmanship and sniping, although the size of their bows prohibits their use from concealment, for they are almost as tall as a standing pandaren.[6]

Archers in World of Warcraft 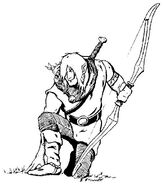 An elven archer and an elven ranger. 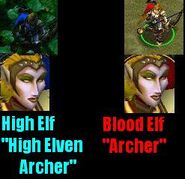