Were you looking for the boss encounter,

Twisting Nether (Formerly)
Great Dark Beyond (Bordered near Azeroth)
Argus is the fel-infused world of the eredar, originally including the draenei. It is — or was — an arcane utopia where mages of the arcane divined the arcane secrets of the ordered universe. Its inhabitants were both vastly intelligent and highly gifted in magic. It had a society where art, science, magic and technology were all as one. Argus was ruled by a triumvirate of the greatest and most powerful eredar mages: Kil'jaeden, Archimonde, and Velen. They ruled from Mac'Aree — the most sacred of the cities on Argus according to Jessera of Mac'Aree.

Eventually, Argus attracted the attention of Sargeras. The Destroyer offered the eredar a deal: in exchange for their loyalty, he would give them power undreamed of by all races. Kil'jaeden and Archimonde were quick to accept the offer, but Velen had a vision of the future: the eredar would be transformed into demons, under the rule of Sargeras. His advice to Kil'jaeden and Archimonde went unheeded, and he desperately sought a solution to this dilemma. Eventually, Velen was contacted by the naaru, and he fled with his followers, renaming his people the draenei, or Exiled Ones.

Kil'jaeden, Archimonde, and the rest of their race became the feared, insidious sorcerers and tacticians of the Burning Legion.

In Rise of the Horde

It was unclear whether the world of Argus was destroyed by the eredar's sudden demonic powers (as implied by previous lore), or if it survived their transformation. It is thought that if Argus still exists, it is certainly a stronghold of the Burning Legion, possibly their seat of power. Rise of the Horde leans towards this interpretation, though nothing is explicitly stated.

It is revealed in World of Warcraft: Illidan, that Argus is in fact intact, and is the "beating heart" of the Legion's forces with all its greatest commanders and Kil'jaeden using it as his seat of power. The entire world has been corrupted into a shadowy version of what it once was. The machines that originally were used to send out peaceful and healing waves of magic over the surface, have been inverted to spread fear, depression, and panic. The capital city of the planet which is unnamed is the current seat of Kil'jaeden and is perhaps one of the most magically protected locations in the universe, with Kil'jaeden himself presiding over the Burning Legion from the palace throne.

It is revealed that Argus is in fact still in existence (although fel-wreathed and shattered) and is the seat of power for the Burning Legion. This is supported with the Warlock class quest which leads you to try and empower the already looming portal on the Broken Shore with Gul'dan himself stating he was going to Argus to fortify it on the other side.

Upon the release of Tomb of Sargeras raid, Illidan, after defeating Kil'Jaeden, uses a demonic portal key to open a rift between Argus and Azeroth. Khadgar then teleports party members off of Kil'Jaeden's fel ship and back to the Broken Isles. The teleportation is successful, but once Khadgar looks up at the sky, he comes to the realization that not only has the party been teleported back to Azeroth, but that the rift was not temporary and continued to grow larger. This was a deliberate action by Illidan who sought to hasten his crusade against the Legion by bringing the fight to them.[1]

One of the Burning Legion's main capital worlds that was once aligned with the Twisting Nether, the planet is now largely visible in the sky and much closer to Azeroth. It also contained a World-soul called Argus the Unmaker, in which the Legion's forces were torturing the titan. A group of broken holdouts who call themselves the krokul have settlements in the Krokuun fragment.

It seemed to have many mountains, Kaarinos for example. The mountainous landscape is mentioned by Valok the Righteous and Anchorite Tessa. The capital city is Mac'Aree.

Much of what remains of Argus will appear in Patch 7.3. Initial maps on the PTR suggest three fragments of Argus will be explorable.[2] The first fragment encountered is called Krokuun, the second Mac'Aree,[3], and the third Antoran Wastes which appears to be the zone surrounding the raid, Antorus, the Burning Throne.[4][5] The only other instance announced so far is the dungeon Seat of the Triumvirate,[4] which also appears to be in the Antoran Wastes.[5]

Views from the explorable fragments suggest that they are actually floating above the planet proper and that the bulk of what remains of Argus is not habitable.[6]

Some of Argus is available to explore in

Argus as seen during encounter with Xe'ra

Argus as shown by Kil'jaeden in Legionfall cinematic

After the defeat of Kil'jaeden at the Tomb of Sargeras

Remnants of Argus from Mac'Aree

More remnants of Argus from Mac'Aree

Seat of the Triumvirate?

The Path to Argus

The Battle for Argus Begins 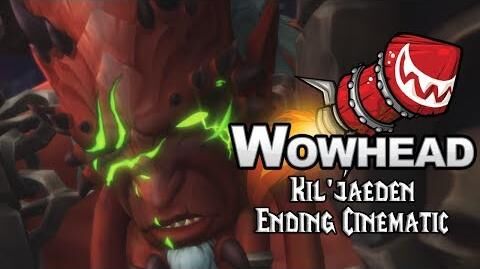 A Thousand Years of War →

WoW Insider Know Your Lore: The Warcraft cosmos, part one: The Material Plane by Anne Stickney May 22nd 2011 6:00PM