Were you looking for Artifact Weapons?

Artifact is the highest level of item quality in World of Warcraft, above Legendary. Previously speculation of these items was documented across fan sites and the official World of Warcraft website, but no such items were available to players until

Artifacts are also the term used for famous and legendary items in lore. Famous artifacts aren't necessarily of Artifact quality in World of Warcraft, however. Several items that are said to be artifacts according to lore, as stated in Warcraft II, III or the RPG, are epic quality or less in World of Warcraft (for example, [The Skull of Gul'dan]). However, it can be argued that since Illidan absorbed the skull, its power has been reduced to Epic-quality level; and the original skull could have been of Artifact quality.

Artifacts in World of Warcraft: Legion

At Gamescom 2015, it was revealed that

World of Warcraft: Legion would feature artifacts, all of which being weapons. There would be 36 artifact weapons (one for each class and specialization). 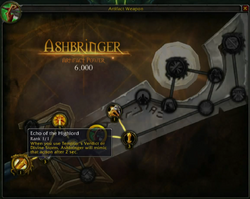 It was also revealed that artifacts would have their own ability trees and their own customization options, most of which completely change the appearance of a weapon. Artifact Power unlocks these traits. Players may gather Power through any numbers of means befitting their personal playstyle and interests. Spending Power essentially "levels up" the weapon, and players are free to choose any trait path they wish to spend the Power on.

Spending Power within the tree allows the player to unlock different traits, abilities, skins, and other aesthetics to further differentiate their personal artifact from others wielding the same weapon. Note that players will have access to the default skin and one "upgraded" skin - additional skins are earned via unlocks from activities such as questing, dungeons, raids, PvP, and potentially other sources. Colors within these skins can be modified.

Examples of Ashbringer's many appearances:

Re: Legendary and Artifacts | 2006-09-30 17:56 | Tseric
The devs would like to improve on Legendary items through addition or revision. At this point, adding Artifact items is somewhat unnecessary, as it would only mostly serve to devalue Legendary items as a whole.

Perhaps when the level cap gets a little higher and that next step in itemization is needed.

If artifacts were actually implemented for players, they would likely be changed from the pale gold now shared with heirlooms. It is possible that they will change to the previously planned red.