Scar of the Worldbreaker, Blackrock Caverns

For his unyielding devotion and penchant for cruelty, the powerful shaman Dessirik the Depraved was gifted with ascension: a dark ritual infused him with elemental powers, transforming him into a monstrosity known as Ascendant Lord Obsidius.[1]

A rather simple fight centered around kiting. There are two adds with Obsidius that each channel a reduced healing debuff on whomever has threat on them when they are in range, preventing their target from receiving any healing.

To counter this effect, you can either kite them around using slowing, snaring or rooting effects (they are immune to stuns and fear), or let threat on them bounce around in a controlled manner (The DPS take threat off the tank when he is low on HP then they all run back to the tank so he can get threat back when his health is full. Hunters are generally the best class to kite them around but mages or shamans are also viable.

Obsidius will also periodically switch places with one of the two adds and reset the threat table. This is the key mechanic to as well as the trickiest part of the fight as the tank must pick up Obsidius and whoever is kiting the two adds must pick them both up again so they are kept separated from each other. Obsidius also will place a debuff on party members called Twilight Corruption which ticks for 4k damage per 2 seconds for 12 seconds. This should be dispelled asap.

Healing: The best way to heal this fight is with a large amount of rolling hots and bouncing threat or quick large heals in the windows of opportunity on the varying targets.

The fight is essentially the same with a few exceptions. There are now three adds that must be kited and they also throw frost bombs that resemble a hunter's frost trap effect and will slow anyone moving across them. Obsidius also gains the ability to slow and knock down the tank as well. 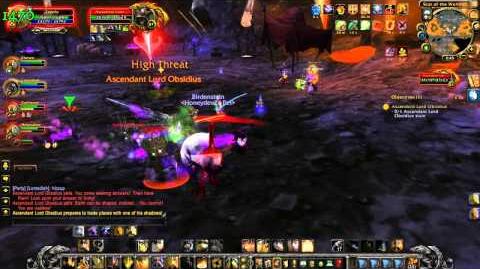