WoWWiki
Register
Don't have an account?
Sign In
Advertisement
in: Articles which are likely to change in Battle for Azeroth, Ashenvale, Forests,
and 5 more
English

Ashenvale, also known as Ashenvale Forest[1], is a wilderness region south of Darkshore and Felwood, west of Azshara, and north of the Stonetalon Mountains and the Barrens. Ashenvale is also the term used for the larger forested region which includes most of western Hyjal including Azshara.[2] It is the ancestral homeland of the night elves, who remain in control of several holdings through the zone, including Astranaar, Maestra's Post, Silverwind Refuge, Silverwing Grove, and the Shrine of Aessina. This has changed since the Cataclysm, as the Horde has begun attacks on various Night Elf encampments and have succeeded in deforesting sections of the forest.

The Horde has established a settlement in the eastern part of the woods — Splintertree Post — as well as a smaller camp on the western beach — Zoram'gar Outpost - along with several Warsong camps situated from Kargathia Keep all through the southeast to the Mor'shan Rampart in the far south. The zone is heavily populated with furbolgs, satyr, and wild creatures such as spiders, wolves, and bears. The region is quite large, and running from the Zoram Strand to the Warsong Lumber Camp is quite an undertaking.

Since the zone is contested there is often a lot of skirmishing going on throughout the woods, and attacks on the faction-based settlements are not uncommon. The zone is also a major travel hub for both Horde and Alliance, even at higher levels.

Ashenvale is an ancient forest, and has been in the caring hands of the Night Elves for thousands of years. It was not until more recent years that things changed, with the coming of the Horde's lumber harvesting camps, as well as other much more insidious groups. The demons of the Burning Legion have holdings in Fire Scar Shrine, Felfire Hill, Demon Fall Canyon and Demon Fall Ridge. The vile satyr inhabit ancient elven ruins at Xavian, Night Run, and Satyrnaar. The vicious worgen have taken over an ancient shrine near Felwood, cursed green dragonkin have slipped out from the Emerald Dream portal at Bough Shadow, and corruption taints the once-clear waters of Iris Lake and the Ruins of Stardust. The Horde have seized control of several holdings in the eastern parts of the forest, and beyond their base at Splintertree Post, they have harvested the trees for lumber at the Warsong Lumber Camp and the Warsong Labor Camp. The Horde clash with the Night Elves over control of Eastern Ashenvale, with the Warsong Outriders vowing to continue their lumber harvesting operations, and the Silverwing Sentinels vowing to drive the Outriders from their lands once and for all.

Ashenvale is a vast primordial wilderness long given over to beasts and nature’s savage ways. The night elves who settled on Kalimdor after the Sundering hunted in Ashenvale’s wilds but never settled within its borders. When the Burning Legion invaded in the Third War, the night elves ceased even hunting in order to battle the demons. The lack of hunting has allowed many creatures to live and thrive within the vast woodland, creating danger for all who venture into the forest. Ashenvale forest runs in a great arc south of Mount Hyjal, with Stonetalon Mountains to the southwest and the Barrens directly south. The ruined lands of Azshara lie across a river to the east. Ashenvale is an old forest, long untouched by any mortal race. The weather is fairly mild, though rain is almost constant. The woods are so old and thickly grown that only trickles of precipitation get through the thick canopy. The forest has become ever wilder since left to its own devices after the start of the Third War. Any roads through are overgrown, some even impassable. In contrast, the game trails see increased traffic as beasts living in the shelter of the massive trees grow in number and boldness. Those traveling through Ashenvale will wisely keep their guard up at all times. In recent years, the demons and satyr have corrupted parts of Ashenvale, and other parts of it are cut down by the Horde to fuel their expansion efforts. The Forsaken, too, have begun experimenting on sleeping druids within the Dor'Danil Barrow Den, unbeknownst to the Horde but not the Alliance.

In addition to bears and great cats prowling the dense woodlands, hulking beak-faced wildkin forage throughout Ashenvale. Vicious harpies are known to make massive nests in the tops of the tallest trees. They hunt at dawn and dusk when the light filtering through the canopy throws the forest into a confusion of shifting shadows. Ancients - sentient trees who act as wardens of the forest - roam Ashenvale as well. Ashenvale is under the protection of ancients and the night elf sentinels. Neither had established a community as such within the forest, though, preferring to leave the vast woodlands in its natural state. Ashenvale boasted no cities; the old forest’s inhabitants are primarily beasts, and there are few humanoid settlements. It is devoid of any notable ruins. Travelers through Ashenvale should treat these forces with respect, especially if they hope to reach their destination. The ancients and night elf sentinels guard Ashenvale zealously with constant patrols. Any who threaten the forest - cutting down live trees, poaching beasts of the forest, and the like - are met with the ancients’ powerful attacks and the sentinels’ deadly arrows. The only unified night elf presence dwelling in Ashenvale is a reclusive group of rangers, the Farstriders. They use the terrain and train other inhabitants in their specialized skills. They hold a difference of opinion amongst themselves regarding strangers in Ashenvale. Some believe that their duty is to welcome and protect travelers, as long as they show no threat to the forest. Others see any strangers as unwelcome interlopers who must be “escorted” to the southern border. Still, whatever their opinion on Ashenvale, the Farstriders bow to the wishes of the ancients and the sentinels. There is little reason to try to take the forest, since it has no cities to invade and no treasures to plunder (that anyone knows of), but the rangers and the ancients remain vigilant nonetheless.[3]

In recent years, the night elves have encountered immense difficulty in holding their lands within Ashenvale. The Horde has attacked on multiple fronts, launching assaults against Astranaar, Maestra's Post, and Raynewood Retreat.[4] Though the night elves and their allies have held the Horde at bay in these areas, Silverwind Refuge was lost as the Horde killed everyone inside. As if the threat of the Horde was not enough, the Thistlefur furbolgs have also expanded their holdings, sweeping down from Thistlefur Village to take over the Ruins of Ordil'Aran. From here they attack Maestra's Post independently of the Horde.

All is not doom and gloom, however. The Alliance has pushed back against the Horde, assaulting Splintertree Post and taking half of the Warsong Lumber Camp. New holdings include Orendil's Retreat (near the border to Darkshore), Stardust Spire (near the Talondeep Pass), and Blackfathom Camp (within sight of both Zoram'gar Outpost and Blackfathom Deeps).

Despite the resilience of the Alliance, the Horde have continued to expand within Ashenvale's borders. This comes at great cost to such inhabitants as the Greenpaw furbolg, whose village is partially overrun, with many of their number taken prisoner. Despite having seen heavy combat, the walls of Zoram'gar Outpost have been fortified and the base expanded. In waging war against both Astrannar and Maestra's Post, the Horde have also established a base of operations between these two areas known as Hellscream's Watch. With their new goblin allies they are also constructing an enormous bomb at the Skunkworks near their new outpost at Silverwind Refuge.[5]

When the Alliance become convinced the Horde are sending troops to Silithus to safeguard azerite, the Alliance fleet is sent to thwart those plans. In reality, Varok Saurfang offered up this misinformation in order for the Horde to gain an opportunity to attack Ashenvale.

With agents already scattered through the forest, ready to strike outposts at his command, the Horde managed to largely sweep through the region, though stalled by the stubbornness of the defenders and Malfurion Stormrage.

Ashenvale is a forest full of ancient trees, teeming with life. Though pockets of the forest have become tainted, overall the area is a place of deep magic and spiritual connection with nature. Several lakes are sheltered beneath the forest's boughs. A stretch of beach lines the west edge of the forest, known as the Zoram Strand, where hostile naga dwell. The forest is bordered by mountains to the south, and more forest to the north. The eastern border is the Southfury River.

, an instanced dungeon located in the northwestern corner of the zone. In addition, the micro dungeon Bough Shadow, the site of one of the Great Trees, can be found in this zone. The Alliance entrance to the battleground Warsong Gulch is located in the southern part of the forest. Travel hubs include Astranaar and Forest Song for Alliance, and Splintertree Post and Zoram'gar Outpost for the Horde.

The events of the Cataclysm scarred many areas of Ashenvale, chief among them Iris Lake and its surroundings. The lake has been destroyed, evaporated by streams of lava pouring from Thunder Peak nearby.[6] The lava, however, has not been able to touch the sacred moonwell. The worgen have all but disappeared from the Howling Vale, as its main tunnel system has collapsed leading into it, with another short cave system opening at its base. The area now crawls with Crazed Ancients.

Another area has recently been stripped of its normal inhabitants as well: Lake Falathim. The murlocs have vanished, and now writhing Tendrils from Below haunt the lake. The area is also gloomy and dank, the site of battle between Keeper Heartwise and Harbinger Aphotic.

Alliance:From Grove of the Ancients in Darkshore, run south along the main road into Ashenvale. Continue along the road south and then east into the main Alliance stronghold of the zone, Astranaar.

Horde:From the Crossroads in the Northern Barrens, travel north to the Mor'shan Rampart and continue along the road into Ashenvale. When the road forks, head east to the Horde stronghold Splintertree Post.

Ashenvale is home to several characters of note. At Maestra's Post, Delgren the Purifier seeks aid in the battle against the Shadow Council. In Astranaar, Raene Wolfrunner attempts to cleanse the taint that has affected the local furbolgs. At the Zoram'gar Outpost, Je'neu Sancrea sends bold adventurers into the dark Blackfathom Deeps in search of mystical items. At Forest Song, the draenei Vindicator Vedaar oversees the construction of a Draenei outpost.

Many quests in Ashenvale for both Alliance and Horde require combat with the demons and satyrs of the zone. Other notable Horde quests include The Ashenvale Hunt, in which players are asked to hunt down rare animals in the forest. Alliance quests include a chain to investigate the worgen of northern Ashenvale.

Alongside Hillsbrad Foothills and Stranglethorn Vale, Ashenvale was one of the places for PvP combat. An Alliance attack on the Crossroads in the Barrens or a Horde attack on Astraanar would result in a back and forth match as players battled across the landscape. Ashenvale was also a prime location for high level players to gank low level players as for many (Orcs, Tauren, Trolls and Night Elves) this was their first contested zone.

Like Hillsbrad and Stranglethorn, Ashenvale has quieted down significantly with the advent of Battlegrounds and increased level caps, but Astranaar/Crossroad raids are not entirely atypical.

The forest outside Silverwind Refuge 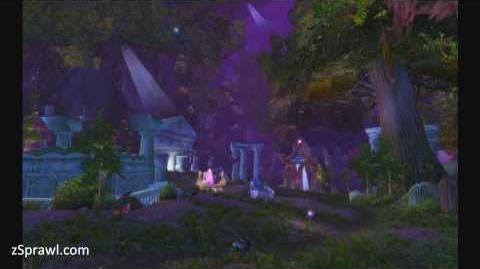 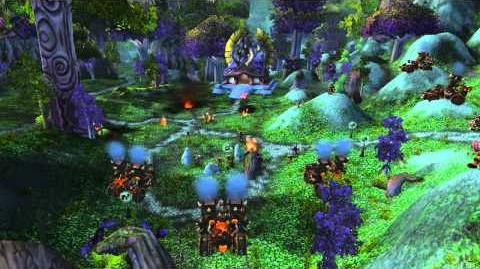 Archimonde's return and the Flight to Kalimdor