Throughout the Warcraft Universe sources the term Azeroth is used to describe several things:

In Warcraft: Orcs & Humans the term Azeroth refers to the kingdom in most cases, and it can be implied that it is a world in only one quote. It can be assumed that, when the game was released, the kingdom and land of Azeroth were one and the same. At the time, the kingdom of Azeroth was the only part of the world known to the player, thus it is possible that the reference to the world and other undefined uses of the term were actually referring to the same thing but were given different uses in the later games.

This section concerns content exclusive to Warcraft II: Beyond the Dark Portal.

In Warcraft II: Beyond the Dark Portal is referred as both, a kingdom, and a world.

In Warcraft III: Reign of Chaos is referred as a kingdom, as a land (continent) and as a world. It is revealed that the world was called Azeroth by its inhabitants.

In Warcraft III: The Frozen Throne is referred as a world.

In World of Warcraft's manual the term Azeroth is used to refer the world, but also used to refer one of the three continents that comprise the Eastern Kingdoms:

Throughout this manual and in the game itself, you will find the name Azeroth used in two different contexts. Azeroth is both the name of the world of Warcraft, and the name of one of the three continents that comprise the Eastern Kingdoms, the landmass opposite of Kalimdor on the world map. The other two continents of the Eastern Kingdoms are Khaz Modan in the center and Lordaeron in the north. Sometimes you will see reference to Azeroth the world, and other times you will see reference to Azeroth the continent.

Although it's stated that there are two terms, there appears to be another use of the term Azeroth: an alternate name of the Eastern Kingdoms. This use is also used in Lands of Conflict and in an in-game quest.[1]

A related incorrect usage by Blizzard is for the meta-achievement

Tricks and Treats of Azeroth, which requires completing the related achievement for Outland (which is not part of Azeroth).

In Warcraft: The Roleplaying Game

The term Azeroth is used to refer the world, the kingdom and the continent. It is also used as an alternate name of the Eastern Kingdoms.

Origins of the name 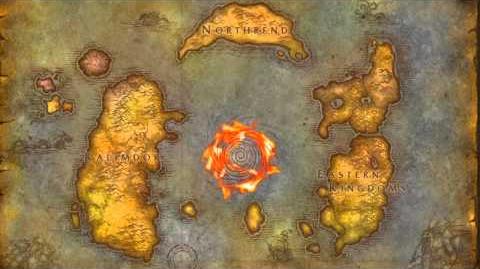 Cataclysm - Azeroth World Map Start Here
An "annotation adventure" linking to other videos of overviews of zones in World of Warcraft: Cataclysm (courtesy of Jesse Cox)