Ironforge prospectors and their crews (100)

The Badlands is a region in Khaz Modan accessed via the Searing Gorge to the west and Loch Modan to the north.

The Badlands are a cracked desert of dry earth, scattered boulders, and winding canyons. Dark Iron dwarves clash with ogres and drakes, while Horde orcs man a fortress to keep watch on their renegade brethren in the eastern lands. Ironforge prospectors search this desolate land for Titan artifacts, inspired by the recently unearthed Uldaman — an immense ruin that held the first clues to the dwarves’ lofty origins. Stonevault troggs, released after millennia of slumber, slaughtered the explorers and viciously defend their stolen city.[2]

Only the hardiest of creatures can survive in the arid wastes, such as feral coyotes, cougars and buzzards. In the far east is a region inhabited by black dragon spawn. Scattered across the Badlands are camps of ogres of the Dustbelcher tribe. In the northwest is a tiny Horde outpost. The northern reaches of this rugged land are home to ruins that were the workings of the ancient race, the earthen. These ruins are known as Uldaman. Dark Iron dwarves also have a large fortress just south of Uldaman.

The fall of the orcish Horde at the end of the Second War left its remnants scattered and downtrodden. The Orcs who once controlled Khaz Modan were nearly annihilated in a massive push by the Lordaeron humans. The ogres and Horde settlement in this region are the remains of the early Horde forces stationed there. Aid and reinforcements have arrived from the current Horde, much to the relief of the Orcs. In the interest of tactics they dug a path through the mountains to reach the Searing Gorge, unwittingly releasing the Dark Iron Dwarves from their "prison". There also seems to be a buried troll temple to the northwest of the Dustbowl's middle part. The "troll temple" has two snake head statues that are similar to those found in the Hinterlands.

Alliance
From Loch Modan, simply head south into the Badlands.

Horde
The Badlands are one of the most difficult questing zones for Horde players to access, but are a vital connecting point between the north and south halves of the eastern continent. See Reaching the Badlands travel guide for a detailed guide on how to get here.

This desolate wasteland is cracked and dry, consisting mostly of flat stretches of land enclosed by the surrounding mountains. A few hills dot the landscape, and the eastern part of the zone is a large canyon full of black dragons.

The instanced dungeon Uldaman can be found in this area. In addition, there are a few micro dungeons in the Badlands. There are no battlegrounds in this zone.

† Not an official subzone, but notable.

The Badlands are home to several characters of note. At his camp in the Dustbowl, Lotwil Veriatus seeks aid in his latest experiment. South of Hammertoe's Digsite, Prospector Ryedol attempts to cleanse Uldaman of the evil Dark Irons. And at Kargath, Warlord Goretooth and his men send bold adventurers into the dark Blackrock Mountain in search of retribution.

The Badlands will be a 45-48 zone in Cataclysm.[3] A landslide has destroyed the town of Kargath, and Deathwing's passage through the zone has left a swath of destruction in its wake. A new goblin port will be built. The storyline jumps across the zone with some surprising twists.

A giant chasm snakes across multiple zones. (Loch Modan on the left, Badlands on the right)

Scar of the Worldbreaker: Some sort of ridged impressions, perhaps caused by Deathwing? 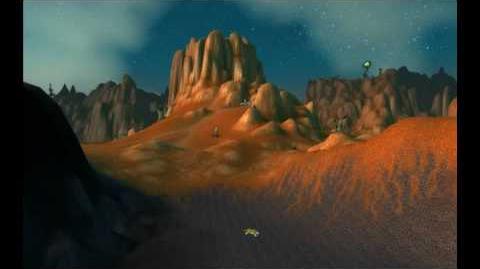 This is an area rich in Minerals and Herbs. The minimum level of mining is around 125-150, but within a few hours you can rise to the 200 area. Even Gold veins appear rather frequently.