This article is about character lore biography. For his strategy on the encounter, see

Balnazzar. For the boss encounter in Stratholme, see

Lord of the Risen

Using the Scarlet Crusade to forward the Burning Legion's goals

Balnazzar (currently under the guise of Saidan Dathrohan, Grand Crusader of the Scarlet Crusade) was one of the three nathrezim siblings left behind in Lordaeron to oversee the demonic conquest of that land. The return of Prince Arthas, following the defeat of Archimonde, sent the three brothers packing, but they quickly regrouped and concocted a new plan to destroy Arthas once and for all.

Though they (and Sylvanas Windrunner, who attacked Arthas on her own terms) didn’t destroy Arthas, the undead prince left Lordaeron, leaving Balnazzar to rule the Plaguelands. Soon after, Sylvanas (who forcibly made Varimathras join her) laid siege to Balnazzar's forces and ultimately forced Varimathras to execute Balnazzar. He later came to possess the body of Saidan Dathrohan, a founder of the Scarlet Crusade.

Balnazzar and his brothers, Varimathras and Detheroc, were not aware that the Burning Legion had been defeated at Mount Hyjal until months after the fact. It was only when Arthas returned from his sabbatical to Kalimdor that he announced Archimonde's destruction. Arthas stated that their deaths would complete their folly. Balnazzar and his brothers quickly teleported away before Arthas could strike.

The dreadlords plotted in the safety of the Tirisfal Glades, and began to form a plan to ruin the undead king. Knowing that Ner'zhul, and Arthas, were losing their powers, they called to Sylvanas, who was no longer locked in loyalty to the Lich King, and asked for her assistance in the coup that was sure to entail. Sylvanas, hungry for vengeance for her current form and the slaughter of her people, agreed. Balnazzar and his brothers staged an ambush for Arthas within the Capital City ruins, separating Kel'Thuzad from him and attacking him with their minions. Balnazzar even loosed other dreadlords on him, but Arthas, rounding up the forces he could find still loyal to him, escaped, or so he thought.

Escorted by a cadre of banshees, Arthas was attacked by Sylvanas, who had prepared a long, grisly death for her murderer, and was about to begin her work when Kel'Thuzad interrupted and chased her off. Though he still lived, Arthas was gone from Lordaeron, or the Plaguelands as they were now called, and Balnazzar was free to reign over it as he liked. He sent Varimathras to bring Sylvanas to join their new order, but things went horribly awry.

Unfortunately for Balnazzar, Sylvanas had plans of her own and laid siege to Lordaeron. She had defeated Balnazzar’s brother Varimathras, who offered to serve her in exchange for his life. Sylvanas accepted and the dreadlord fought at her side in the attack on Lordaeron. Balnazzar received word from his scouts that Sylvanas had coerced Varimathras to her side, killed Detheroc, and allied with his human minion, Garithos. The banshee and her forces laid siege to Balnazzar's base, which he had fortified within the city ruins. Even armed with demons as his minions, Balnazzar found himself attacked from both ends by Sylvanas and Garithos, and despite his many threats, Balnazzar's forces were defeated.

Sylvanas, Varimathras, and Garithos approached Balnazzar. Sylvanas ordered Varimathras to kill his brother as a testament to his loyalty to her. Varimathras was reluctant. Killing another nathrezim was forbidden, but Sylvanas was adamant.

Balnazzar was sure that Varimathras would never take that final step. He was wrong. However, Balnazzar survived — Varimathras allowed his brother to fake his death in order to fool Sylvanas.[3][4]

To remain hidden, Balnazzar went underground. Not content to simply sit by while the undead legions overran Azeroth, he formed a new plan to oppose them. He possessed the body of the paladin Saidan Dathrohan, who then helped found the Scarlet Crusade, an order of knights focused on the singular goal of defeating the Scourge in all its forms. Though on the surface the Crusade seems merely interested in fighting the Scourge, it is secretly (through Balnazzar) a tool of the Burning Legion, which still hopes to destroy Azeroth. Balnazzar likely hopes to curry favor with the surviving Lords of the Legion by destroying the Lich King.

Balnazzar also uses agents to do his jobs. One day, a mysterious prophet emerged from caverns underneath the Stonetalon Mountains. The prophet warned that the Burning Legion was coming soon and would be ushered in by the Forsaken and sent adventurers on anti-Forsaken missions. Upon further investigation, it was found that the "prophet" was really an agent of Balnazzar, who had survived his "death". Balnazzar had plotted his revenge against Sylvanas ever since that day — and the prophet was apparently just one small part of his plan.[2]

No one in the Crusade is aware that Dathrohan is a demon — they simply believe him to be a holy knight obsessed with the destruction of the undead. Balnazzar uses this fact to his advantage as much as possible, intending not only to defeat the undead but one day secure his hold on Lordaeron once again. To maintain his charade, Balnazzar kept (and still keeps) a low profile, letting others run the Scarlet Crusade.

At present, Balnazzar dwells within the Scarlet Crusade stronghold in the besieged ruins of Stratholme, in the deepest reaches of the Eastern Plaguelands. The Scourge and the Crusade remain locked in battle, at a stalemate primarily because Balnazzar depends upon his masquerade for his long-term plans. His agents actively recruit new members for the crusade, and his ranks grow steadily. Should anyone find out his true nature, however, the Scarlet Crusade could potentially fall apart overnight, and the undead would become the only power in the Plaguelands.

Balnazzar attempts to remain in his possessed form as long as possible, not revealing his true nature until absolutely forced to do so. He avoids using spells or spell-like abilities unless they could be paladin spells or he can do so in a way that makes them look like they came from a magic item. He avoids direct combat, preferring to let his minions do the fighting for him. If cornered and sorely pressed, he reveals his true nature, abandoning his possessed body and emerging in all his glory. The hulking demon’s skin is a waxy purple, save the black bat-like wings. Its eyes glow crimson as it raises its massive greatsword. At this point he lets loose with all the firepower at his command, subduing and then destroying his enemies with demonic fury.

Any allies who remain by his side are then slain in turn, so that he may preserve his secret, and he returns to his former body to maintain the masquerade. If his secret is openly revealed, he retreats, seeking vengeance on those responsible at some future time. Balnazzar can possess the body of a creature he has slain through the use of his energy drain ability. In doing so, his form turns to a misty cloud that invades and takes over the corpse, while the soul of the slain creature moves on to its final reward (or punishment). The slain creature cannot be raised from the dead through any means other than a true resurrection for as long as Balnazzar possesses it (True resurrection ejects him from the body at once). His power sustains the body so it does not decompose; in fact, it appears in all respects as if alive.

Balnazzar wears paladin gear (Scarlet Crusade armor and the like) in Saidan Dathrohan’s guise. Otherwise, he carries a greatsword of wounding; this sword is tied to Balnazzar’s life force, and anyone else touching it or trying to wield it is corrupted as long as he contacts the weapon. If Balnazzar possesses a creature, the sword vanishes with him, returning to his side when he emerges. Balnazzar also has a ring of protection and wears bracers of armor.[5]

Balnazzar (along with Mal'Ganis) is the only Dreadlord known to have the powers to possess another being as proven with his possession of Saidan Dathrohan. He also seems to be able to take on the mannerisms of whomever he possesses and can express false compassion despite being a Demon. This makes him highly convincing, making his diplomacy alone one of his many strengths. One example of this is shown when he makes conversation with Renault Mograine convincing him to betray his father.

He is also able to use the blood of those he possesses (or of his own possibly) to project images, as seen in the Ashbringer. Balnazzar is able to telepathically communicate using this projection, this may be shared by other Dreadlords seeing as Varimathras can communicate with him also.

In addition he can also cast the drain life spell which he uses in the battle against the scourge at Hearthglen to heal Dathrohan's wounds killing a scarlet crusader in the process.

Also, he is the final boss of the Stratholme Living Side, located within the the Scarlet Bastion in The Crimson Throne. He begins the fight as Grand Crusader Dathrohan, but eventually sheds his human disguise for his true form. It should be noted that if killed too quickly, he will not transform into his true form, and players will not receive the achievement regardless of the kill.

Two realms in World of Warcraft are named after Balnazzar: Balnazzar Europe and Balnazzar US

After the events in Northrend and Undercity, Balnazzar sheds his disguise and kills the remaining Scarlet Crusaders, using his necromantic powers to resurrect them as the Risen.

When Tirion was captured, Balnazzar guarded the Ashbringer in order to kill anyone who attempted to claim it.

Statistics in Warcraft III of Balnazzar at Level 10 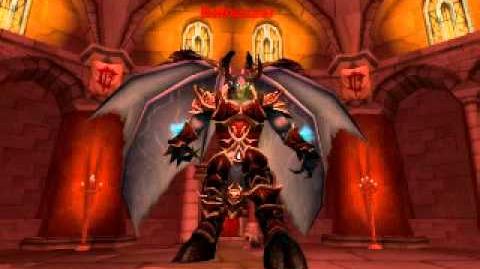