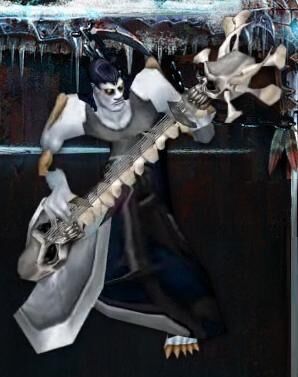 The Bard was revealed as the second World of Warcraft hero class on April 1st, 2008 — it was a Blizzard April Fools' Day hoax, and was never implemented as a real playable class.

According to the announcement, the Bard "can vanquish evil with the power of ROCK!" and wields a two-handed "axe" (that is, an electric guitar). Screenshots showed a new Fret Bar interface (resembling that of the Guitar Hero games) powering the Bard's "Groove" resource system. Blizzard even joked that the Wrath of the Lich King expansion would ship with a Frostmourne-themed "guitar-based keyboard peripheral" for playing the Bard class.

Announced as the second of the hero classes for the upcoming Wrath of the Lich King expansion, the Bard will allow players to enter combat using Guitar Hero-style interface with 2-handed axes as weapons of musical might. Utilizing a new resource system known as "groove", the player will be able to perform abilities and launch a Fret Bar in order to perform riffs with a guitar-based keyboard peripheral. Performing riffs will build "groove", allowing them to unleash more powerful abilities and effects. The Bard is able to front in a number of roles as varied as his musical repertoire, and excels both as a solo performer and as part of a solid group lineup.

The deeds of every great hero inspire countless songs of triumph, virtue, and epic adventure. But although a hero’s glory endures in song, the creators of those songs are seldom remembered. After ages spent singing of the heroic exploits of others, the bards of Azeroth are finally stepping into the spotlight on their own terms, proving once and for all that while just about anyone can pick up a sword or cast a spell, only a true hero can vanquish evil with the power of ROCK!

The time has come for the bards to claim glory for themselves. No longer will they remain shrouded in obscurity while less-talented adventurers are hailed by the masses.

The other April Fool's Day pranks from 2008:

The MMORPG Ragnarok Online has had a Bard class for several years, and it does indeed use guitars as acoustic weaponry. It does not, however, use a Guitar Hero-style interface.

Ultima Online has also had a Bard class for many years. Lutes, flutes and harps are used to reduce a creature's stats, pacify it, or incite it to attack another creature. Thus it is not used as "weaponry" in the sense of doing direct damage.

Final Fantasy XI has Bards as well, they're a primarily support job. Using wind and stringed instruments they are highly sought after in parties for their songs that buff party members and enfeeble monsters. One popular song restores mp to party members. They can wield daggers, swords, and staves but rarely do they engage in combat