For information on Baron Rivendare in Naxxramas, see

The Scourge, formerly the Kingdom of Lordaeron

Acherus: The Ebon Hold and Crypt of Remembrance, Scarlet Enclave or The Horsemen's Assembly, Naxxramas

Baron Rivendare (also know as Titus Rivendare) is a powerful death knight in the service of the Lich King. Originally ruling over the city of Stratholme for the Scourge, he now leads the Four Horsemen of Naxxramas in place of Highlord Mograine.

Once a wealthy human landowner, the plague corrupted Rivendare and he pledged himself as a death knight. Rivendare’s duty is to round up and murder any human survivors he can find, and he and his patrols do just that.[2] (LoC 95) He coordinates the efforts of the Lich King in the Plaguelands. He currently battles with agents of the Argent Dawn sent to Stratholme to kill him.

Once, Baron Rivendare was a wealthy Lordaeron landowner and a friend of Kel'Thuzad. He fell under the necromancer’s sway and helped build and structure the Cult of the Damned. Rivendare then achieved the title and powers of a death knight. Now, Rivendare has his base in Stratholme. He serves Kel'Thuzad eagerly and exults in his power. One of his greatest joys is to instill corruption in others, especially paladins, and most especially members of the Argent Dawn. This knight is a regal figure — his face is pale but aristocratic, and white hair hangs to his shoulders, while a scarf covers his face. He crouches over a horned, skeletal steed, and purple runes glitter across his black armor, cloak, and runeblade. Baron Rivendare excels at melee combat (especially mounted warfare) and he knows it. At the earliest possible moment, he charges, whether afoot or mounted on his skeletal horse, Deathcharger. Then the baron unleashes the dreadful power of his runeblade. He prefers to fight with created undead to support him, and he uses death pact on these to recover hit points. Rivendare enjoys testing his mettle against fellow close combat specialists, but strikes at arcanists and healers if they prove bothersome.[1] (MG 156)

In World of Warcraft, he drops a very rare epic mount, the Deathcharger. He also drops all the Dungeon Set 1 leg items — one per kill. Furthermore, he is involved in the Dungeon Set 2 quests that came with patch 1.10.

He also appears in the instanced version of Acherus: The Ebon Hold next to Highlord Darion Mograine. While passing the death knight quest line the Baron changes his location and can be found in the Crypt of Remembrance. He gives the quest

He also appears in the 10 and 25-man versions of Naxxramas, replacing Alexandros Mograine as the leader of the Four Horsemen. As he was killed and beheaded by players at the behest of the Argent Dawn in the quest

[60D] Above and Beyond, it is unclear how...although the Lich King's powers of reanimation are legendary.

The Baron Rivendare fight presents two major challenges. First, his damage aura, which applies shadow damage to everyone in range. Second, he periodically spawns waves of skeletons from the bone piles scattered around his room. If these skeletons survive long enough, he casts Death Pact on them, killing them but healing himself.

To deal with the shadow aura, have your tank position the Baron against one wall of the chamber. Have your healers and ranged damage dealers stand on the opposite wall. This will allow them to stay out of range of the aura, avoiding the damage and casting interruptions. The tank and melee damage dealers will have to absorb the aura's damage. A priest can buff the group with Shadow Protection, or a paladin can use the Shadow Resistance Aura to mitigate that damage. If the tank has any kind of shadow resistance gear, it's not a bad idea to equip it, although not absolutely required to defeat Baron.

The skeletons will almost always immediately aggro your healer. One of the easiest ways to deal with this is to have a class with high AoE damage, like a mage or a warlock in the group, and position them right next to the healer. They can then AoE the skeletons, which have moderate damage but very low hit points, as they rush towards the healer.

If you don't have a mage or a warlock in the group, there are other ways to deal with the skeletons. A priest with the Holy Nova talent can kill the skeletons and keep the ranged party members healed at the same time, but this is very mana intensive, and he might need that mana to heal through the Baron's damage. A paladin can use Holy Wrath as well, which will normally kill all the skeletons and hurt the Baron somewhat.

You can also try having members of your party use the [Stratholme Holy Water] that can be gathered throughout the instance. One bottle is generally enough for each wave of skeletons.

At the beginning of the Stratholme Undead side instance, there is an NPC you can talk to. If you have the Medallion of Faith, obtainable in the Stratholme Live side, you can give this to the NPC and he will assist you once you attack the Baron. This quest is repeatable.

Owners of pets must note to have their pets in passive mode as they enter the chamber, as their response to the shadow aura damage will likely trigger the encounter before the party is ready.

In the Scarlet Enclave

I am convinced that they are a unique lot amongst the humans. My theory is that they lack higher brain function, unable to logically assess a situation and calculate an outcome. One has only to make mention of the Light to get them frothing and battle ready - at which point they will rush headlong into any engagement with complete disregard for their own well being. 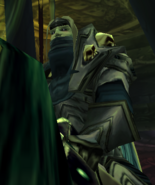 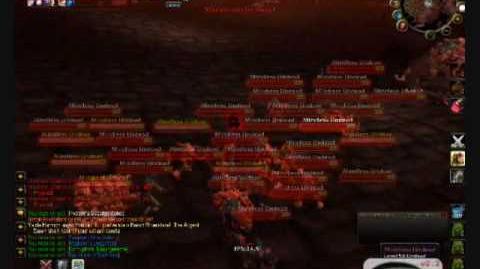 This section concerns content that is potentially inaccurate. Reason: Need to re-check NPC links and see if changes needed.