The Barrens is a large zone in central Kalimdor controlled mostly by the Horde. It is a massive savanna, with a few oases in the north-central region around the Crossroads.

Before the upheaval, several large kaldorei cities stood here. Now, those brave few willing to scrape out a life on the arid plains inevitably run afoul of centaur warbands or quilboar raiding parties.

Despite its often uninviting terrain and hostile inhabitants, the Barrens receive a good deal of interest from Alliance and Horde alike, as well as races native to Kalimdor. Trade routes crisscross the landscape leading to and from more inviting regions, and the most notable route is the Gold Road that runs north-to-south through the Barrens and beyond.

Rumours suggest that precious minerals and treasure-filled ruins await those with the courage to investigate.

The Barrens was once a thriving forest under the protection of the night elves and their kind. Several kaldorei settlements dotted the land, and there was no ocean for miles. Then came the Burning Legion and the Great Sundering, which shook ancient Kalimdor to the bedrock. This forested landscape transformed into a scorched plain and is battered now each day by the sun's rays. The Barrens is a sprawling and arid savanna that stretches between the Stonetalon Mountains to the west and Durotar to the east. The grasslands and mesas of Mulgore rise to the southwest, while the wetlands of Dustwallow Marsh lie to the southeast.

The majority of the region consists of vast plains. Mountains to the west hold in heated air, creating the swirling winds that rage across the plains. These windstorms stir up dust devils and tear apart anything larger than the small, tenacious scrub trees. Water is more valuable than gold in the Barrens, and the locations of hidden watering holes are the residents' most closely held secrets. Dry riverbeds and a never-ending spider web of canyons make any journey across the Barrens a dangerous and winding trek.

The few brave adventurers willing to scrape out a life on the arid plains inevitably run afoul of centaur warbands or quilboar raiding parties. Despite its often uninviting terrain and hostile inhabitants, the Barrens receive a good deal of interest from Alliance and Horde alike, as well as races native to Kalimdor. Trade routes crisscross the landscape leading to and from more inviting regions, most notably the Gold Road that runs north-to-south through the Barrens and beyond, and rumors suggest that precious minerals and ruins await those with the courage to investigate.

Centaur warbands are most often seen in the Barrens' canyons, though they roam as far as the river that forms its eastern border with Durotar. Fearlessly aggressive, the centaur are known for their savagery, especially against tauren and night elves. They are not above attacking trade caravans also, for the goods or just for the sake of violence. Travelers who survive the centaur’s battle lust are used as slave labor in the hardscrabble mines the centaur carve into the hard-baked earth. Displaced from Durotar by Orcs, quilboar have built crude villages along the river that separates the orc nation from the Barrens. From there, they strike out across the river to raid settlements or deeper into the Barrens to attack caravans along the Gold Road.

The caravan raids have hurt the goblin trade princes’ profits, so they have started negotiations to pay the quilboar gold and goods to protect caravans against centaur warbands. The quilboar have also erected a fortress called Razorfen Downs in the southeastern Barrens. Razorfen is a sprawling mass of giant, twisting thorns and crude mud huts. It serves as the center of quilboar society. Other dangers include harpies who watch from perches atop mesas in the northern Barrens and large beasts such as lions and thunder lizards - though these creatures tend to avoid the Gold Road.

Native dangers have not stopped the Ironforge dwarves from establishing a stronghold near the titan excavation site of Bael Modan. The centaur have made forays against it, but are repelled decisively each time. Scouts claim that the centaur are amassing other tribes to launch a major attack, but the dwarves are unconcerned. Each day that passes sees Bael Modan grow stronger as the inhabitants build up its defenses.[3]

When the orcs under the new Warchief Thrall had landed on the Barrens, it saw civilization anew. The Horde built new settlements among the dry grasses and arid hills, and placed the Barrens solidly into the heart of Horde territory. The Horde has set up numerous outposts in this barren land, the largest being the Crossroads. The Barrens are also dotted with numerous farms populated by orcs and their families, and guard towers manned by orcish and tauren guards.

Razorfen Downs lies just opposite the road, but this dungeon has been infested by agents of the Scourge, and poses great threat to anyone who is traveling to or from the Thousand Needles.

From Mulgore, follow the main road east out of the zone, then continue though Camp Taurajo (there is a Wind Rider Master in Camp Taurajo) and turn north through the Gold Road to get to the Crossroads. Get the flight path there too. You can also take the zeppelin to Orgrimmar from Spirit Rise in Thunder Bluff. It passes through the Barrens, and you can jump off (and survive!) while over Taurajo or the Crossroads.

If you are an orc or troll, go to Razor Hill (The small orc town south of Orgrimmar in Durotar) and go through the road west, then continue south through the Gold Road.

If you are a Forsaken or blood elf, take the goblin zeppelin to Orgrimmar, the Zeppelin Tower is just north of the Undercity, then go down to Razor Hill and use the same route as orcs and trolls.

Catch a boat to Ratchet from Booty Bay. Once there, get the flight path.

You can also take the boat to Theramore from Menethil Harbor and then run through Dustwallow Marsh into the Barrens. You will need to then run north and east to reach Ratchet.

An alternative method is to travel to Darkshore, then to Ashenvale. Walk all the way to the Mor'Shan Rampart without getting close to the guards. To the east there is a small entrance, free of Horde guards, that Alliance can go through.

The Barrens are a temperate and warm land.[4] It has hot rugged hills, plains (grassland), some rocky desert and rugged mountains.[5]

The Barrens are huge, one of the largest zones in kalimdor. The land is mostly flat, with a few hills scattered throughout. The climate is harsh and hot, but survivable due to several lush oasis. With a stretch of coastline to the east, mountains to the northwest, plains to the west, forest to the north, marsh to the southeast, and the desert conditions to the south and northeast, the Barrens is surrounded by extremely varied landscapes.

The Barrens contain three instanced dungeons, the Wailing Caverns, Razorfen Kraul, and Razorfen Downs. The Horde entrance to Warsong Gulch is located to the north. There are two Horde aligned travel hubs in this zone: the Crossroads and Camp Taurajo, in addition to the flight path and boat in Ratchet available to both factions. There are no raid dungeons in the Barrens.

The Crossroads is likely the biggest travel hub for Horde characters, with a total of 13 flight paths. Camp Taurajo, a secondary hub in the southern Barrens, is very useful for travel from one end of the zone to the other.

Ratchet has both a Horde and Alliance flight master, and a boat which sails to Booty Bay in Stranglethorn Vale.

Flight paths from the Crossroads

Flight paths and boats from Ratchet

The Barrens are home to several characters of note. At the Crossroads, Sergra Darkthorn sends promising young adventurers to prove their worth to the Horde by hunting local wild creatures. She is assisted in her efforts by Jorn Skyseer in Camp Taurajo, who also refers them to continue their quests in Thunder Bluff.

At his fortified camp west of the Crossroads, the beleaguered Regthar Deathgate fights a one-man battle to keep the savage centaur from breaking through the Horde defenses. The Barrens is also home to Mankrik who gives out the ever so infamous quest to find his wife.

Being such a huge zone, the Barrens has a wealth of quests for Horde characters between levels 10 and 20. Of particular note are the hunting quests given by Sergra Darkthorn at the Crossroads, which lead to similar quests in other zones.

Many quests in the Barrens deal with fighting back the centaur and the quilboars. In addition, the Venture Company has taken a foothold in the northern Barrens and several quests involve investigating and causing trouble for them.

Notes and Other Info

Following the release of The Burning Crusade expansion, Horde players now can completely bypass the Barrens if they wish by questing in Ghostlands and then moving onto Silverpine Forest and Hillsbrad Foothills.

There are a number of reasons that a player might choose to do so:

After the third expansion, the zone is split in two with a lava river separating the Northern Barrens and Southern Barrens. A fortified gate and high wall now separates the southern Barrens from Mulgore.

The zone was split into Northern (about the same level range as it is now) and Southern Barrens (levels 30-35). Camp Taurajo was burnt to the ground by the Alliance, who begin to move into Southern Barrens (no doubt from Northwatch, or perhaps Bael Modan), constructing guard towers throughout. Also portions of the southern part of the zone will become lush, thanks to the efforts of druid Naralex; however, the Emerald Nightmare is pouring out into the zone, causing trouble. Finally, the pirates near Ratchet will be forced out, and Mankrik will find his wife's body.[6]

The lava at the Barrens is, as of the playing of the beta, a non-flyable area, where a player will be dismounted if they try to fly over the lava. There is no indication as to if this is a bug or an intended action, or if this will change for the final release, though it appears to be the former since there is no visible way to escape from the lava other than death and resurrection (and in one YouTube upload, releasing after death makes the player automatically rez in a random spot in Southern Barrens, giving more indication that the no-fly zone is not intended and is rather a bug). There is no reason given as of yet from Blizzard as to why the no-fly zone would be intentional, assuming it is intentional.

Artwork of the split

Lava in the Barrens

More lava in the Barrens. The Wailing Caverns can be seen in the background.

The southern end of the zone

The Barrens seen at Cataclysm cinematic. 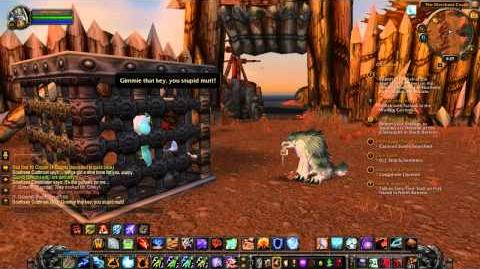 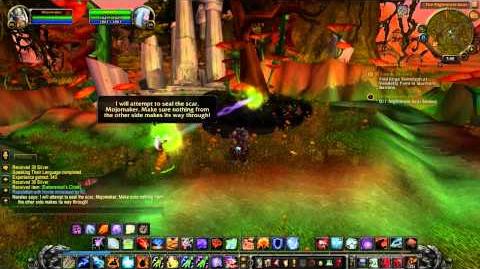