Bastion of Twilight is an entry-level raid instance introduced in World of Warcraft: Cataclysm. It features five bosses plus one optional heroic boss.[1][2]

The Bastion of Twilight, along with Throne of the Four Winds and Blackwing Descent, is meant to be the "Naxxramas" of Cataclysm: an entry level raiding.[1][2][3]

The Bastion itself seems to be located largely underground, as no windows or something similar is visible and the only part not built by the Twilight's Hammer appears to be the large lava sea Halfus Wyrmbreaker is watching over. If this is true, it may also be the reason how the Twilight's Hammer Cult could grow to powerful over the last years without any of the great forces of Azeroth noticing.

Upon defeating Cho'gall on heroic mode, the floor beneath players will collapse and they will fall into a cavern of flowing lava and "a very large number of black [sic] dragon eggs" that hides a "horrifying secret".[1][2][4][5] 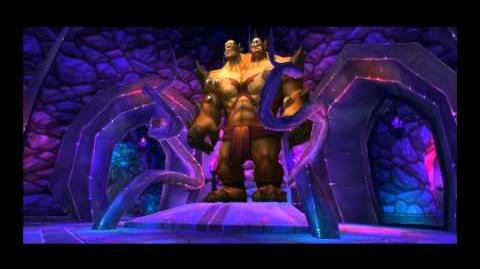 Archive.org The Bastion of Twilight

Archive.org The Bastion of Twilight