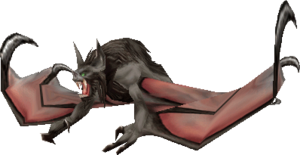 Bats are nocturnal, flying mammals that usually feed on fruit and insects. Most are no bigger than the average bird. A number of bat species in Azeroth grow to enormous size and pose a threat to players. Some of them are useful mounts for the jungle trolls and Forsaken. Bats are found in the Tirisfal Glades, Blackrock Depths, Shadowfang Keep, Zul'Gurub, Razorfen Kraul, Eastern Plaguelands, Ghostlands, Karazhan, and Uldaman.

Though hunters can respec their pet bats into Ferocity or Tenacity, they are inherently Cunning. In addition to the abilities that come standard with all pets ([Growl] and [Avoidance]) and those given to their natural or retrained specialization, all bats are given the following: