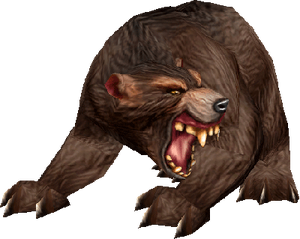 A very common, bulky, furry, four-legged beast that lopes along on all fours, but may occasionally rise up on hind legs. Most bears are hostile when approached, despite their sometimes cuddly appearance. They tend to be larger than human sized at their smallest. Bears are found in Dun Morogh, Loch Modan, the Hillsbrad Foothills, Ashenvale, Feralas, the Western Plaguelands, Darkshore, Elwynn Forest, Silverpine Forest, Bloodmyst Isle, and Winterspring.

There are varieties of "plagued" bears that roam Felwood and the Western Plaguelands.

Very popular as hunter pets due to their easy diet.

Though hunters can respec their pet bears into Cunning or Ferocity, they are inherently Tenacity. In addition to the abilities that come standard with all pets ([Growl] and [Avoidance]) and those given to their natural or retrained specialization, all bears are given the following:

The subspecies below can be tamed by hunters. Dwarf hunters start with a dark brown bear.

Mobs with level numbers can be tamed by hunters.