Bears are the mainly epic ground mounts, that are obtained from a variety of different ways.

While the rigging on the bears differs between Alliance and Horde, you are only offered your faction's version by Mei Francis in Dalaran. This will set you back 750 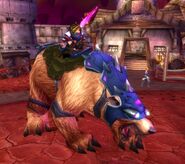 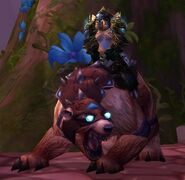 For The Alliance! or

For The Horde!, the leader of your faction (Varian Wrynn for the alliance, Thrall for the Horde) will send you this mount. (You might want to avoid the postman for a few days...)

The Amani War Bear is a reward from Ashli's Bag for completing the timed event in Zul'Aman on Heroic mode.

The White Polar Bear is found (very rarely) in the Hyldnir Spoils bag rewarded for completing one of several daily quests from Gretta the Arbiter in Brunnhildar Village. 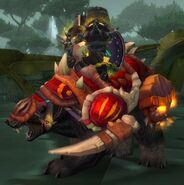 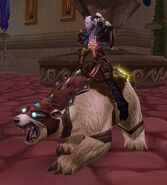 The Big Battle Bear is a reward from turning in the code on one of the collectible game cards.

The Big Blizzard Bear was a reward from the BlizzCon 2008 welcome package (or from getting the DirectTV subscription in the USA). 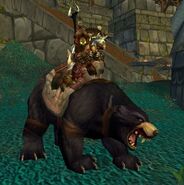 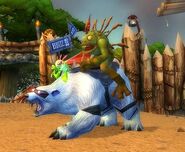