Beauty's past is a tale as old as time, a song as old as rhyme. After Beauty's mate, Beast, was slain by heroes in Blackrock Spire, the hound and its four remaining pups joined forces with the Twilight's Hammer, intent on punishing the creatures who killed its mate.[1]

Beauty is the fourth boss of the Blackrock Caverns, and can be found waiting in her lair

deep in the bowels of the Caverns.

Before pulling Beauty, the Twilight Borer/Elemental packs must be cleared out as they hold a social aggro link to Beauty and will aggro when she does to prevent adventuring parties skipping packs of mobs. After all mobs are cleared, pull the puppies and kill them. Each of the puppies have a frontal fire breath attack and place fire voids on the ground periodically that tick for 2k each second. All these effects STACK based on the number of puppies pulled/alive.

A "tank n spank" for the most part. The tank should simply face Beauty away from the party while maintaining aggro. When a party member gains the debuff Magma Spit they should move away from the group and return once it is removed as removing it triggers an AOE effect.

Beauty will also periodically charge the furthest away person and cast a fear AOE.

DO NOT KILL RUNTY! He's right at the back, but if you kill him she'll enrage and it will become very difficult to defeat Beauty then.

Heroic: The heroic version is much the same as the normal fight with one large exception: all the puppies and Beauty pull together no matter which you aggro first. Her fear AOE also has a much larger radius and is cast more frequently.

One strategy found to work is to CC all the puppies (or as many as you can), then tank Beauty in the tunnel facing out into the corridor. This way, there's enough room for AOE not to hit the puppies, and if you get feared you only have a small chance of being feared out into the corridor. Clearing the packs around the area may help to ensure you don't pick up random adds, the patrol especially.

Note: if DPS is high enough and one of the puppies breaks CC, just keep nuking, unless you can re-cc and the tank can move Beauty. 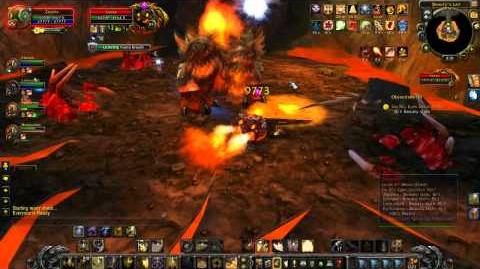