This article is about the corrupted Temple of Karabor in Outland. For the alternate timeline version in Draenor, see Karabor.

The Black Temple is the fortress-citadel of Illidan Stormrage, Lord of Outland. It was once known as the Temple of Karabor, and has changed hands many times over the generations.

It is a level 70 raid instance in Outland, containing tier 6 drops and the Twin Blades of Azzinoth. The entrance to the Black Temple does not appear to be its main gates, but rather an instance portal set in a breach in the southern battlement, below the ruins of Karabor

. It no longer has a required attunement.

Though the attunement is no longer required to gain entrance to the Temple, you can still complete it. Below is a short guide on how to.

First you have to complete Akama's Promise. Then players adventuring in the Serpentshrine Cavern will have access to a quest from a Broken NPC named Seer Olum in Fathom-Lord Karathress's room (the quest is entitled The Secret Compromised). After delivering a message to Akama, he informs Illidan of Kael'thas' treachery in order to attempt to prove his loyalty (Illidan believes him, but is still suspicious). You will then need to slay Al'ar in the Eye of Tempest Keep so that Akama can convince Illidan he is still loyal.

The next part of the attunement involves killing Rage Winterchill, a lich boss, which is also the first boss in the Battle of Mount Hyjal instance. After this you are sent to Xi'ri outside the gates of Black Temple. You must slay the demonic Illidari forces outside the Temple in order to provide a distraction for Akama and Maiev to slip into the Temple undetected. After that Xi'ri rewards you with the [Medallion of Karabor].

Before the shattering of Draenor, the Black Temple was once called the Temple of Karabor, a sacred site to the draenei which served as the refuge of the Prophet Velen. Shortly after the formation of the Horde, Gul'dan ordered the temple conquered and transformed it into the headquarters for the Shadow Council, renaming it the Black Temple in the process. It was later used as a fortress for the then-mortal Ner'zhul. In the trailer for the Black Temple, it shows the scene where Gul'dan's troops attack the temple.

After Illidan conquered much of Outland, including the Black Temple, and following his defeat at the hands of Arthas Menethil, Illidan returned to the Black Temple where he resides to this day. Neither his activities nor mental state are known at this time. While Malfurion has stated that Illidan has become mad and delusional, believing that he killed Arthas and accomplished the mission Kil'jaeden had sent him on, it said on the Burning Crusade website[cn] that "Illidan lives in fear that he will be discovered by his powerful enemies — most notably Arthas, the new Lich King, and the remaining Lords of the Burning Legion." If Illidan has descended into madness and believes he accomplished his mission it would make no sense for him to worry about Arthas or Kil'jaeden coming after him; he would believe the former dead, and the latter appeased. But then again, those afflicted by madness rarely make sense.

It has been confirmed that the Black Citadel was renamed to Black Temple, although it is unclear why it was moved from the Hellfire Peninsula to Shadowmoon Valley. For a full analysis of this issue, please see Black Citadel and Temple.

From The Black Temple in Under Development:

Originally founded as a Draenei temple, this plot has been conquered and despoiled many times throughout the history of Outland, removing any spiritual grace it may have once held. The Black Temple has been the stage of the Orc Horde's blood curse, fortress for the then-mortal Ner'zhul, and a prime staging ground for the Burning Legion's campaign of destruction... Most recently, it has been claimed as home by Illidan, where he and his minions make their bid for power over the remnants of the shattered planet. Now, it is up to you to face the malefic forces of Illidan and his minions in hopes of freeing Outland from chaos and tyranny.

From Black Temple Preview in Under Development:

Long ago on Draenor, the Temple of Karabor was the center of draenei worship. But the devout priests who prayed there are long dead, slaughtered by marauding, demoniacally corrupted orcs. In the massacre's aftermath the warlocks of the Shadow Council seized the structure and bestowed upon it a new name: the Black Temple.

For years the Shadow Council bloodied the Black Temple with foul demonic rituals, but after the Second War the dark spellcasters fell to the Alliance's devastating invasion of Draenor. The shaman Ner'zhul hastily opened several dimensional portals in order to stage a retreat, and the resulting magical backlash ripped the world apart. In what had become the fractured realm of Outland, Ner'zhul's portals were a strategic advantage that appealed to the demon general Magtheridon, who quickly seized the Black Temple as his seat of power.

Magtheridon commanded many of the orcs remaining in Outland and bolstered his army with Legion forces streaming in through the portals. The pit lord's might remained unchallenged until Illidan the Betrayer decided to claim the Black Temple for himself. Illidan and Magtheridon fought a desperate battle on the temple walls, but in the end the pit lord proved no match for the wielder of the Twin Blades of Azzinoth. Illidan battered Magtheridon to the point of death, but the thrill of victory was short-lived....

The skies of Outland darkened as Kil'jaeden himself appeared before Illidan, furious at Illidan's failure to destroy the Lich King. The Betrayer was forced back to Azeroth for a disastrous attack on Icecrown Glacier. Bloodied by the death knight Arthas but not fully beaten, Illidan returned to Outland and established his throne within the Black Temple. And yet, despite Illidan's efforts to seal Ner'zhul's portals, Kil'jaeden's wrath will not be denied. Even now the merciless Doomwalker batters at the temple gates.

Akama and Maiev: Involvement in the Temple

It's now known that Akama is involved in the battle against Illidan. Until the defeat of Illidan, the question as to the involvement of his "prisoner", the Warden Maiev Shadowsong, remained unclear. At the end of the quest Akama's Promise, Akama states that when the time comes for the players to battle Illidan, he would be at their side. Also, the vision from A'dal at the end of that quest describes Akama and Maiev battling through the Temple with a shadowy figure, which is said to be the player who turned in the quest.

The final quest for the Medallion of Karabor involves battling Illidari demons (see "Attunement" above) in order to allow Maiev and Akama time to sneak into the Temple. Akama initially helps players in the final battle against Illidan, with Maiev replacing him towards the end of the fight in order to kill her nemesis. As Illidan dies, he tells Maiev, "the huntress is nothing without the hunt... you are nothing without me."

The following quest line was published on the 1st of April 2007 [1]. This was a reference to the Hyjal attunement quest that technically requires players to complete most of the high-level dungeons in the game. Hyjal attunement was also a step in Black Temple attunement.

The planet Azeroth is visible in the southern sky from the courtyard where you fight Supremus.

It is also visible from the Temple Summit, although the view is cloudy.

There is some speculation on just how far Azeroth is away from Outland.

Note: After killing Gorefiend, you'll head back to the Refectory and head towards the top right of the atrium into the Halls and Shrine.

Sanctuary of Shadows and the Refectory

Grand Promenade and Chamber of Command 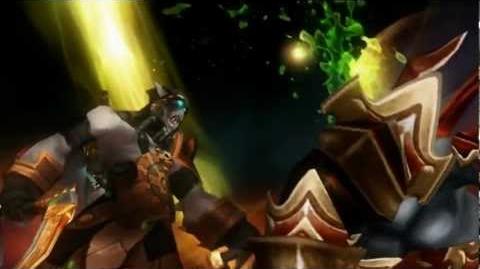 The Black Temple (The Burning Crusade Patch 2.1.0)
The Official Trailer 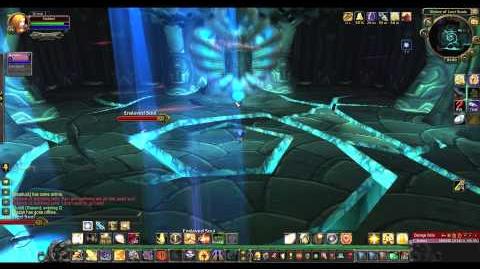 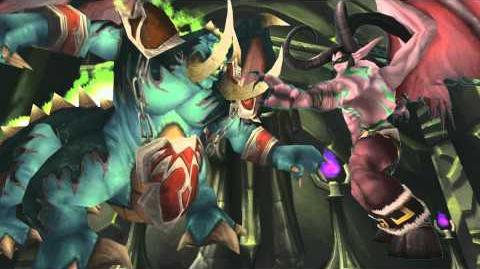