The dragon is a large, thickly-built creature with a massive chest and a long, sinuous neck. Its hide is a rich, lustrous black with large scales that are supple yet hard as rock. A crest made of peaked bone spikes runs from its head and down its back, and bristles as the great beast grows angry. Its fangs shine a coppery-red, and deep inside its mouth a constant sulfurous light emits a faint glow.

Black dragons are associated with earth. Most are members of the Black Dragonflight. The term "dragon" is sometimes used instead of the term "mature" to describe the adult phase of a black dragon's lifecycle, between adolescence and becoming a wyrm. They are 100-500 years old.[1]

Black dragons are large creatures that are carnivorous. They spend their time hunting, as well as watching the various wars around the world, and can often be found torturing prisoners, animals, or anything else unfortunate enough to fall into their care. A black dragon is a large, thickly-built creature with a massive chest and a long, sinuous neck. Its hide is a rich, lustrous black with large scales that are supple yet hard as rock. A crest made of peaked bone spikes runs from its head and down its back, and bristles when the great beast grows angry. Its fangs shine a coppery-red, and deep inside its mouth a constant sulfurous light emits a faint glow. Most civilized races say that black dragons have a cruel, callous look to their serpentine faces. Black dragons do not shed individual scales, but rather molt once a year — usually by spending a week resting within a lava flow of an active volcano, which peels off and consumes their discarded skin. The skin of a black dragon nearing its molt grows dull and grey.

Most black dragons appear with their horns and wings in a shade of orange to brown, but a few females appear with purplish wings and horns. Deathwing himself appears black, plated with adamantium, with fiery veins running across his body.

The Aspect of the black flight, Deathwing, is one of the fiercest and most evil creature in existence. In his lifetime, he has destroyed many ancient cities. Deathwing often makes deals with intelligent races, trading members of his dragonflight for slaves and humanoid torture subjects.

Black dragons were once earthwarders, caring for stone and mountain and using their formidable abilities to cause the rise and fall of terrain. They were to maintain boundaries between the races so that none would fall to war over land. They maintained this purpose for a time, living in relative harmony with other races and shaping the land to better use. At this time, Deathwing was known as Neltharion. When Neltharion was influenced by the Old Gods, he no longer was Neltharion but became Deathwing. He began a policy opposite his charge by the titans. He lowered mountains so that races would mingle and destroyed land so that the races would fight each other. His occupation became death. They traded their powers of earth for the powers of fire and magma.

All other dragons of Azeroth fight against Deathwing’s flight.

Although overconfident, black dragons are canny. On spotting a target, black dragons may make a snap decision to attack rather than following and considering the enemy party’s size or strength. Still, they will not land until all ranged fire has ended and the enemy seems routed. Black dragons will not remain committed to battle unless certain they can win or unless the enemy taunts them beyond the point of reason. They are not interested in material possessions and are more than willing to leave behind physical goods. They are drawn to prisoners, particularly nobles and children. If the situation seems desperate, a black dragon will flee with a prisoner in each clawed fist. Although they are not as large as some other dragonflights, they use daring and savage intellect to entrap and destroy their enemies. Black dragons prefer to flame their prey, trapping targets on dangerous ground before swooping in for the kill. They are vicious fighters and rarely retreat. They are most often encountered alone, as they are jealous of sharing kills with another. Still, families with a new clutch of drakes or a clutch of enslaved black dragons are not unknown.[2]

Black dragon from Manual of Monsters. 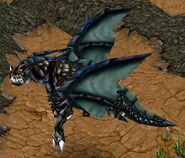 Black dragon from World of Warcraft.

"Obsidian", "Ebon(y)", and "Onyx" is usually associated with the black dragons.