Were you looking for the alternate-timeline version located on Draenor,

Blackhand (alternate) or the movie version,

The Destroyer, Fearsome Leader of the Orcs, Warchief of the Horde

Warchief of the Horde, Chieftain of the Blackrock clan

Blackhand the Destroyer was the Warchief of the Horde during the First War between Stormwind and the Horde.

A Raider of the Sythegore Arm, and one of the most respected warriors in the Horde, Blackhand became the renowned chieftain of the powerful Blackrock clan on Draenor. Known as a tactical genius and a ruthless dictator who demanded respect from his warriors, his ego and lust for power made him very easy to manipulate — a fact which Gul'dan discovered very quickly. Through political manipulation and by stoking the embers of Blackhand's ego, Gul'dan was able to convince the Blackrock chieftain that he was a respected equal in the warlock's dark scheme, both the public leader of the Horde and a member of the secret Shadow Council; he was in fact merely a means to an end for the evil warlock.

Blackhand eagerly offered all of his shamans, cut off by the spirits for waging their demon-incited war against the draenei, to become the first Horde warlocks. In order to increase the number of warriors the Horde would be able to field against the draenei, Blackhand even had his own children's ages accelerated, making them battle-ready. With popular support — no doubt manipulated by Gul'dan — Blackhand was elected Warchief of the newly formed Horde, but kept in line with Gul'dan's objectives through subtle bribery and outright blackmail. Commanding from the Hellfire Citadel, Blackhand directed the later campaigns against the draenei, including the invasion of Shattrath City.

Blackhand also dueled Durotan once after he found out, through Gul'dan, that Durotan had sheltered one of the draenei Blackhand had captured that had escaped. The duel ended with a draw after the draenei ran off and Blackhand left with a grudge.

Leading the Horde through the Dark Portal after defeating the draenei, Blackhand conducted the entire war effort against the Kingdom of Stormwind in what became known as the First War. Though Stormwind eventually fell, Blackhand was left vulnerable when Gul'dan fell into a coma after attempting to steal information pertaining to the Tomb of Sargeras from the mind of Medivh. Seizing the opportunity provided by the powerful warlock's incapacitation, Blackhand's second-in-command, Orgrim Doomhammer — later known as the Backstabber for the deed he was about to commit — decided to seize power from the puppet Warchief, hoping he could lead his wayward people from the path they had taken. Leading loyalist troops in a surprise attack, Doomhammer defeated Blackhand and cut his head from his shoulders, becoming both Chieftain of the Blackrock clan and Warchief of the Horde.

Dozens of these throwing axes were given as marks of honor from Blackhand the Destroyer to worthy members of the Blackrock clan he ruled. Orgrim Doomhammer earned his first while a member of the clan, then seized a brace of four more from Blackhand himself when Doomhammer murdered the Destroyer to usurp the position of Warchief. A short haft of black wood with four alternating silver and crimson bands is topped by a curved, tooth-like blade of polished steel.[1] (S&L 164)

The Horde's king piece in Karazhan's Chess event takes the form of Blackhand.

In the Warcraft movie, a fel-enhanced Blackhand is killed in Mak'gora by Anduin Lothar. The fight is frighteningly quick, as Lothar uses superior agility and quickness to severely injure Blackhand before killing him. 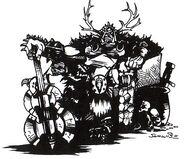 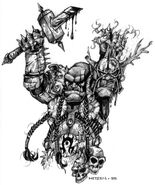 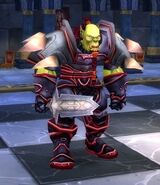