The Defense of Strahnbrad
Jaina's Meeting

Chapter 2 of the Warcraft III human campaign, The Scourge of Lordaeron.

Uther Lightbringer and Arthas Menethil move against the Blackrock clan of orcs, who have recently captured citizens from Strahnbrad. Though they quickly build a base and recruit riflemen from smith and enchanter Feranor Steeltoe, Uther and Arthas arrive too late to save the villagers who were just sacrificed to the Burning Legion by orcs who have re-embraced their demon worshiping.

Arthas leads an assault against the Blackrock encampment, slaying every orc there. His vengeful fury foreshadows his coming descent into madness. After destroying the encampment, he defeated Blademaster.

(Two horses arrive at the encampment without knights on them)

As you start, get Arthas to go to the mortar team, who will give you 4 riflemen and a blacksmith for free. It is optional, and not necessarily when making a speed run, that you kill the dragon. Get a rifleman to destroy one of the crates at your base, as it drops a hidden treasure. Make the farms near those crates and the barracks right there. Put about 5 peasants to work on the gold mine and 3 to carry lumber. Your footmen should be made fast. Upgrade your towers meanwhile to help Uther, and get Arthas to help him too. When ready for a direct offensive, go to the fire pit, kill the troll and the orc, move further to the Blademaster, kill the guards, and kill him while tracking him, as he will create clones. 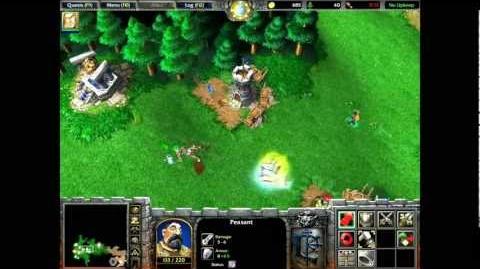