Blizzard Downloader (or Blizzard Background Downloader, Background Downloader, BackgroundDownloader.exe, and others named something-BKGND-downloader) is a combination BitTorrent/HTTP client used for Blizzard Entertainment's software products. It was first implemented with the MMORPG World of Warcraft. It is used to download the full game installer package, and periodic updates for the game. It is also used to download the trailers for The Burning Crusade, StarCraft II, and Diablo III. Early versions were based on the source code of the original BitTorrent client, though it is unclear what the source model is now. When a large update is issued, Blizzard Downloader is downloaded to the WoW directory and it fetches the update file, using TCP ports 3724 and 6881. Blizzard offers an individual client for each download they offer, instead of just a torrent file. Blizzard Downloader also runs in the background under the name of Background Downloader. While the downloader is running, the program also uploads parts of files over the internet to other users who need the same data. To pause a download in progress, simply close the downloader program (do not cancel the download first) and it should resume where it left off when you start the downloader again.

Cataclysm expansion, the downloader's look was updated to match the overall look of the expansion. Because the downloader is rarely seen standalone, most players won't notice it's new look. The downloader is now usually only called from the launcher, if set to run while the main game is running.

In patch 3.0.8, the look of the downloader was upgraded to match the launcher and made to look more specific to World of Warcraft. Previously, the window was much simpler with considerably less artistry. There were no obvious functional improvements, but the splash art could possibly change with each patch or for different product downloads (assuming it is still used for non-

The downloader was further changed with patch 3.2.

On Windows PCs circa the

Wrath of the Lich King expansion, many people had found out their Background Downloader would not execute and popup after WoW had been closed. This would prevent people from pre-downloading patches. The problem was fixed by deleting the file BackgroundDownloader.exe and running the repair program to download a new one.

The Blizzard Downloader bundle is actually a plain BitTorrent client that has at least one .torrent file inside. The .torrent can be opened by other BitTorrent clients giving the user greater control over how the download is handled.

It is possible to extract the .torrent file from the end of the downloader executable:

Earlier versions included a Macintosh-variant of the .torrent as well, but this has been removed in later versions. You may also need to remove some trailing characters at the end of the file, since they do not all belong to the .torrent; essentially, the resulting file has to be Bencode-compliant.

Alternatively, start the background downloader and check the end of Logs\BackgroundDownload.log for a message like this:

This .torrent file can be used with any BitTorrent client. Alternate locations may include the Cache folder, depending on the WoW client's locality. 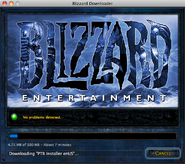 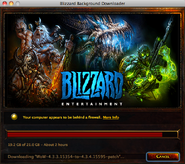 Comparison of BitTorrent software on Wikipedia.

dbservice.com downloadPatches.sh - Linux shell script that extracts the torrent files from all Blizzard Downloader clients in the current directory

progenitus.com extorrents - Perl script that extracts the torrent files from all Blizzard Downloader clients in the current directory