This article is about the blood elf playable race. For blood elves in general, see blood elf.

The blood elves of Silvermoon City start in the Eversong Woods, the northern section of Quel'Thalas. Farther south is the Ghostlands, a level 10-20 zone.[1]

Long ago the exiled high elves landed on the shores of Lordaeron. They struck out to find a new home, and after many battles with the trolls, established the kingdom of Quel'Thalas. Using a vial of sacred water stolen from the first Well of Eternity, the high elves created a fount of mystical power at a convergence of ley energies in Quel'Thalas. They named this fountain the Sunwell. Its potent arcane magic fed and strengthened the high elves, and soon the wondrous city of Silvermoon was established.

Protected by a magical barrier, the high elves enjoyed peace for roughly four thousand years, but that peace was not meant to last. The Amani trolls gathered an immense army and assaulted the elven kingdom. Vastly outnumbered, the high elves hastily struck an alliance with the human nation of Arathor. The elves taught a small number of humans how to wield magic. In exchange the humans aided the elves in destroying the trolls' power base forever. Over the following years the high elves returned to their reclusive ways, but during the Third War, the diabolical Prince Arthas Menethil (under influence of the Lich King and following the Burning Legion orders) brought battle once again to their doorstep. Arthas required the power of the Sunwell to revive the necromancer Kel'Thuzad and raise him as a lich. He invaded Quel'Thalas and wiped out most of its population. In the end, even King Anasterian Sunstrider lay dead.

Additionally it became clear that the high elves had become addicted to the Sunwell's arcane energies. Now that the source of their magic was gone, the few remaining high elves quickly grew ill and apathetic. Prince Kael'thas, last of the royal line, returned from his studies in Dalaran to find Quel'Thalas in ruins. Thirsting for vengeance, he gathered the survivors, renamed them "blood elves" (sin'dorei in Thalassian), and took a group of the strongest fighters to join Lordaeron's campaign against the Scourge.

Due to human prejudice, Kael'thas was forced to accept the assistance of Lady Vashj and her reptilian naga. When the humans discovered that the blood elves had been working with the naga, Kael'thas and the others were imprisoned and condemned to death. Lady Vashj soon arrived to set them free, leading them through a portal and into the broken wastes of Outland. There, the elves met the one being capable of putting an end to their hunger: the renegade night elf/demon, Illidan Stormrage. Certain that the blood elves would die without Illidan's assistance, Kael'thas agreed to serve the Betrayer.

A lone representative, Rommath, was sent back to Azeroth with a message of hope for the blood elves remaining in Quel'Thalas: that one day Kael'thas would return to lead his people to paradise. Rommath had made great progress in teaching the blood elves advanced techniques to manipulate arcane energies. With renewed purpose, the blood elves have rebuilt the city of Silvermoon, though it is powered by volatile magics. Emboldened by the promise of Kael'thas' return, the weary citizens of Quel'Thalas now focus on regaining their strength, even as they forge a new path into an uncertain future.[2] (TBCMan 12, 13)

At the bidding of his new master, the wayward prince eventually returned to Azeroth and seized the site of the Sunwell, hoping to use the fount as a means to usher Kil'jaeden into the world. Ultimately, Kael'thas was slain before his recklessness could bring ruin to Azeroth. In the wake of Kil'jaeden’s defeat, the draenei prophet Velen purified the Sunwell with the Light-infused heart of a fallen naaru, transforming the fount into a source of both holy and arcane energies.

Inspired by the Sunwell’s rebirth, the blood elves have since entered into a shining new era in their ancient race’s history. Although some elves remain hesitant to abandon their dependence on arcane magic, others have embraced change for the betterment of Quel’Thalas. Yet only time will tell if the blood elves can avoid repeating the tragic mistakes of their past.[3]

alternate timeline) who allowed the return of the Burning Legion to Azeroth, Illidan was revived and began rebuilding his army of Illidari (demon hunters). Either due to prejudice or some other unknown requirements, only blood elves and night elves were allowed to join his demon attribute-enhanced army.

Connections to other Horde groups

Males of the race are tall and slender, standing above the average human, and characterized by a lean, athletic musculature, making them seem somewhat thin when compared to larger races such as orcs. Females stand somewhat shorter, just above a human male in height, and have slender, delicate builds. They have a wide range of hair colours spanning from charcoal black to nearly white and a spectrum of skin colours ranging from pale to tan to ruddy. Blood elves have very long and thin ears, however their ears differ greatly from a night elves. The ears of a blood elf point vertically, whereas a night elf's ears point behind them. Blood elves also have eyebrows that extend well off of their face like whiskers. Both males and females are what would typically be considered exceptionally beautiful, with chiseled, refined features; males can also sport some facial hair, in the form of goatees. Their eyes glow green due to the influence of the fel energies they turned to with the destruction of the Sunwell.

The starting clothes for blood elves vary depending on the class, for example, the caster classes, like mages, priests, and warlocks begin with a robe (each one resemble the colors of the class, e.g. red for warlock) while the melee classes begins with a war-like armor, made of mail, linked on the middle (for paladins) or made of leather with a bit of body armor for hunters and rogues.

Most of the blood elf magisters use robes, with different colors, like red, green, and purple.

Classes that don't start at level 1.

[Arcane Torrent] - instant - 2 minutes cooldown
Activate to silence all enemies within 8 yards for 2 seconds. In addition, you regain 6% of your mana. If you play a death knight or a rogue this ability restores 15 runic power/energy.

[Arcane Affinity] - passive
10 point skill bonus to Enchanting (this raises the cap by 10 at each level of enchanting).

Arcane Torrent comes as a natural manipulation of Arcane energies from the Sunwell and allows the elves to tap into and unleash the magic that is their birth right. The elves have long delved into the magical and arcane as evident by their cultural centerpiece, the Sunwell. Thus, they have developed a natural Arcane Affinity as a result of the well's magical presence, making the blood elves naturally skilled with arcane arts such as Enchanting. The elves' constant exposure to magic also gave them a natural defense against many kinds of magical manipulation, granting them a natural Magical Resistance.

Blood elf characters can play as the following classes:[4]

It is also quite likely that the decision was made to reflect the magic nature of the blood elves as all their classes use some kind of magical powers. (With the possible exception of rogues, although that class' description refers to them using a 'touch' of mysticism. Also rogues can be explained as a type of ranger.) Additionally, blood elves generally prefer to engage enemies at range - only three of their classes are melee fighters. Also, Mana Tap would not work with rage. However, with the recent addition of the death knight's runic power mechanic, this is no longer justification, as Arcane Torrent awards the very similar depleting-with-time resource of runic power, though runic power is magical, and not emotional energy.

As seen in the Undead campaign in Warcraft III: Reign of Chaos and the Blood Elf campaign in Warcraft III: The Frozen Throne, elven swordsmen with no mana do exist. Thaladred the Darkener and the Sunblade Vindicators(no relation to Draenei paladins) also appear to be warriors, both use warrior abilities, have no mana bar, and the former is wearing the Warrior tier 5 armor set.

Because of these examples, it is not unjustified that Warriors will become a playable class for Blood Elves in Cataclysm.

The racial mount for the blood elf is called the hawkstrider, although at first they were named 'cockatrices' as announced by GameSpot.[5] Blood elf paladins (Blood Knights) have a darker version of the charger that is black with bronze and red armor.

Roleplaying a blood elf...now there's a tricky subject to speak about. One way that makes it easy is to think of a nobleman or a nobleman's guard; they speak what some might call a "royal language". Most of their words are formal, especially to those of their own kind or the Forsaken, as the Forsaken are their close allies. As for their beliefs, the blood elves mainly have a faith in the Arcane as well as The Light. They hold a grudge against their high elf brethren as well as their night elf cousins. Even with this hatred, the blood elves are more like the high elves than one might think. 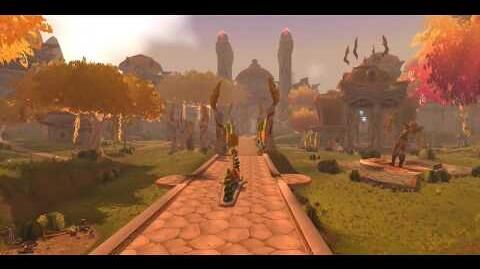 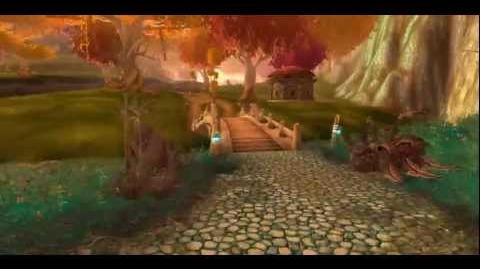 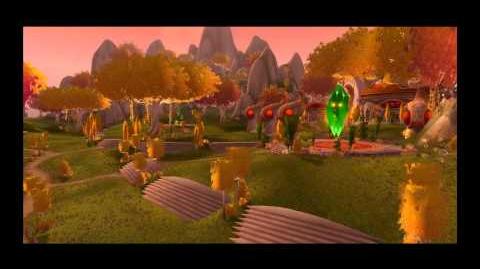