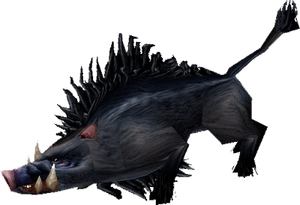 Boars (aka wild boars) are a common, usually furry, cloven-hoofed, four-legged beast that is the wild ancestor of the domesticated pig.

Though not carnivores, these wild swine are bad tempered; they usually charge anyone who disturbs them. A boar is covered in coarse, grayish-black fur. Adult males are about 4 feet long and 3 feet high at the shoulder. A boar is such a tenacious combatant that it continues to fight without penalty even while disabled or dying.[1] (MGWS 5)

Most boars are neutral when approached and are generally omnivorous. They start at around large dog-sized and get larger from there. Some boars are minions of the quilboars. Boars are found in Dun Morogh, Loch Modan, Elwynn Forest, Redridge Mountains, Durotar, Mulgore, Blasted Lands, Razorfen Kraul, Razorfen Downs, Westfall, Eastern Plaguelands, and Teldrassil.

Boars are very easy to feed, a feature that appeals to some hunters. Though hunters can respec their pet boars into Cunning or Ferocity, they are inherently Tenacity. In addition to the abilities that come standard with all pets ([Growl] and [Avoidance]) and those given to their natural or retrained specialization, all boars are given the following:

The subspecies below can be tamed by hunters. Orc hunters start with a black boar.