Highlord Bolvar Fordragon was a venerated paladin of the Alliance and served as the Regent of Stormwind following the disappearance of King Varian Wrynn. Upon Varian's return, Bolvar was named the commander of the Alliance forces sent to take the battle to the Scourge in Northrend. After the treachery of Grand Apothecary Putress at the Battle of Angrathar the Wrathgate, Fordragon was believed to have been killed, either by the Forsaken Blight or the fires of the red dragonflight.

However, Fordragon survived, his body altered by the dragons' flame, and was taken by the Scourge into Icecrown Citadel, tortured by the Lich King in an attempt to break his will. However, the noble spirit of Fordragon resisted the Lich King's depredations. After the death of Arthas Menethil, the mortal host of the Lich King, Fordragon demanded that Tirion Fordring place the Helm of Domination, containing all of the powers of the Scourge, on his head, so that he would forever be the jailer of the damned - imprisoning the Lich King within the Frozen Throne once more and containing the threat of the Scourge.

He is voiced by Carlos Larkin.[citation needed]

Lord Bolvar was as stalwart and loyal of a soldier as they come, perhaps to a fault. While he did his best to look after Stormwind’s interests, he seemed to have fallen under the charm of the alluring Lady Katrana Prestor, much like many others in the kingdom. By deferring to her judgment, he had allowed for some crucial gaps in the defenses of human-controlled territory. He was one of the few who was aware that the true king of Stormwind, Varian Wrynn, was missing (and probably alive). This was one of the justifications for keeping most of Stormwind’s army centralized; Katrana had convinced Bolvar that the boy King, Anduin, would be the next target of whoever captured or killed the real King on his diplomatic mission. It was suspected that Varian was captured because his trip to Theramore signified an effort to make peace with the Horde, and a number of forces wished the fighting between the Alliance and the Horde to continue.[3]

Upon Varian's return, Fordragon commanded the defense of Stormwind against a surprise Scourge attack, and afterwards led the armies of the Alliance to Northrend, where he aids Alliance players in defeating the lich Thel'zan the Duskbringer. In a bold maneuver, his forces laid siege to Angrathar the Wrathgate, the rear entrance to the dread Icecrown Citadel. Both Bolvar and Dranosh Saurfang, commander of the Horde's Kor'kron Vanguard, confronted the Lich King himself, with both Alliance and Horde armies in the battle. During the encounter, in which Saurfang fell to Frostmourne, an explosion rang out behind the Lich King, and out came Grand Apothecary Putress. Announcing to the Scourge leader that the Forsaken have neither forgotten nor forgiven him, a number of catapults moved behind him and launched an unprovoked attack on both Alliance and Horde forces. Bolvar ordered his troops to fall back, but was eventually killed by the gas, the life sucked out of him, and his very body rotting before finally dying. The Forsaken attack was considered by the Alliance to be outright treachery on the part of the Horde, giving King Varian — who had considered Bolvar a brother — a reason to purge the Horde from Lordaeron. Enraged, Varian led Alliance forces in a battle for the Undercity to bring Putress to justice.

There is a dialogue between Korialstrasz and Alexstrasza after the Wrathgate event. Due to a bug which allowed some players to speak Draconic,[4] some players are able to read and translate Alexstrasza's words:

Alexstrasza: [Draconic] They must not discover the fate of the young paladin. Not yet.

It is later revealed that Bolvar's body was recovered by the Scourge along with that of Dranosh Saurfang, and has been tortured mercilessly by the Lich King. Despite the Lich King's extensive efforts to corrupt him, however, he has thus far managed to resist.

After the Lich King is slain in Icecrown Citadel, a cinematic opens up, at last revealing Bolvar's fate.

Jailor of the Damned

After Arthas Menethil was slain, Tirion Fordring took up the Helm of Domination, the crown of the Lich King, preparing to don it himself. As he did so, Bolvar intervened, calling from his seat upon the Frozen Throne, his body warped by the red dragonflight's fire. As a last act of service to Azeroth, Bolvar asked that Tirion place the Helm of Domination on his head. As the self-appointed "Jailor of the Damned," Bolvar seeks to keep the Scourge under control. As Bolvar encased himself and the Frozen Throne once again in ice, he warned Tirion that no one could know what happened. Tirion would have to tell the world that the Lich King was dead, yet as his voice changed, he added that Bolvar Fordragon had died with him, warning Tirion to "leave this place, and never return"

Several years before Legion, a blood elf named Lyandra Sunstrider traveled to Icecrown Citadel in order to obtain the runeblade Felo'melorn. But eventually she was killed by the Scourge. Aethas Sunreaver sends an adventurer to locate Lyandra and the runeblade. Bolvar says that they can try to take the blade, but if they fail to do so, they will join the Scourge.

Bolvar also aided the Death Knights in their mission, he sends them to gather Frostmourne's shards.

After the events of Battle for Azeroth, Sylvanas Windrunner proceeded towards the Icecrown citadel in order to face the new Lich King herself. Defeating his guard without any effort, she faced Bolvar at the top of the citadel, infront of the Frozen Throne. A battle commenced and Bolvar Fordragon was defeated by Sylvannas without managing to even damage her. She then proceeded to remove the Helm of Domination from him with the words that he's unfit to wear it. Holding the crown in front of her, she ripped it in two, thus creating a void above Icecrown and breaking the veil between Azeroth and the Shadowlands.

Highlord Bolvar Fordragon is featured in the TCG set Servants of the Betrayer. The card image shows him fighting Onyxia's Elite Guards.

In the Trading Card Game

Battle of Angrathar the Wrath Gate 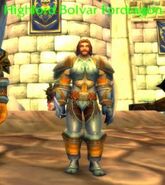 Bolvar in the TCG (Servants of the Betrayer)

Bolvar in the TCG (Wrathgate) 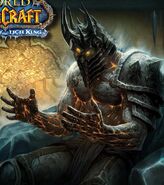 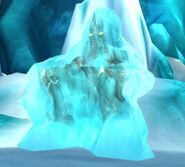 Bolvar as the Lich King, sealed inside the Frozen Throne.

See this subject on the Hearthstone wiki: Bolvar, Fireblood