A mature bronze dragon is the adult phase of a bronze dragon's lifecycle, between adolescence and becoming a wyrm.

Bronze dragons are smaller and more agile than dragons of the other flights, and they appear to be built for speed rather than stamina. Their bodies are thin and dexterous, with scales almost metallic in appearance. The quality of their scales is such that they are sometimes mistaken for constructs or detailed statuary. Bronze dragons are fastidious, keeping their mesh-like scales clean and shining at all times. The dragon is long and slender, its scales glinting with a metallic sheen. A spiky bone ridge runs down its back and forms a wicked point at the end of its tail. Its forms shimmers from golden yellow to rich orange in the sunlight as it darts through the air.

Bronze dragons prefer to use their spell-like abilities and breath weapon to confuse and scatter enemies. Afterward, they approach foes singly, swooping from the air or fighting on the ground depending on which approach offers the best tactical advantage. Bronzes can also be very patient, watching from afar until a target lets down its guard.[1] 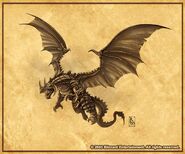 From Manual of Monsters. 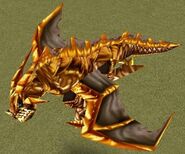 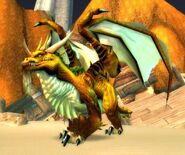 In World of Warcraft.

"Amber" is usually associated with the bronze dragons.