The Horde, Confederated Tribes of the Tauren

Cairne Bloodhoof was the Chief of the united tribes of the tauren, chieftain of the Bloodhoof, and leader of Thunder Bluff. Allying with the Horde upon its arrival on the shores of Kalimdor, Cairne stood as one of its wisest and most venerated leaders. He wielded the shaman-blessed Bloodhoof Runespear.

Cairne is voiced by William Bassett.

The fearless and wizened leader of the Bloodhoof Tauren, Cairne lived near the shores of the Great Sea in the Barrens.

Cairne was a fearless warrior and a wise leader of his ancient people. Though slowed somewhat by the weight of age, Cairne still possessed great strength and valor. This great hearted giant knew that his people are in grave danger of extermination from the marauding centaurs. However, he never gave up hope of one day finding a way to lead his people to a new land where they can make their home and live in peace.[3] (W3man 145)

However, between the centaur marauders' savage attacks on his people and their hunting of local game to near extinction, Cairne planned to relocate his tribe to the verdant lands of Mulgore. But with centaur attacks growing more and more frequent, Cairne knew that on the open plains they would not be able to defeat them, and he quickly began to lose hope.

Things changed when Cairne met Thrall, the young warchief of the new orcish Horde, and, watching him battle and destroy a group of centaurs who had been attacking a tauren, he became intrigued with their nobility and savagery. When Thrall told him that they came to look for their destiny, Cairne directed him to the north, where there was an Oracle.

Thrall reported seeing an army of centaur going north, and Cairne quickly left to defend his village. Thrall brought his followers with him, and followed Cairne to defend the village. After defending against wave after wave of centaur warriors, Cairne told Thrall of his plight, and Thrall vowed to protect the caravan of Tauren as they crossed the barrens to Mulgore, in exchange for the location of the Oracle.

Cairne and Thrall managed to evade and defeat the centaur marauders, and finally made it to Mulgore. Cairne told Thrall that the Oracle was within Stonetalon Peak, and bid him good luck.

Upon arriving at Stonetalon, Thrall was surprised to find that Cairne had sought him out, and pledged to repay the debt they owed Thrall and the Horde. Cairne enlisted the wyverns to help them, and helped to free them from the harpies. He then helped to claim the peak from the humans so that they could enter freely. However, Jaina Proudmoore entered first.

Cairne and Thrall split upon entering the bowels of Stonetalon, and Cairne found an enchanted spirit stone that would activate an ethereal bridge towards the Oracle. When they found the Oracle, Cairne and Thrall found Jaina already there. All three spoke to the Oracle, whom Thrall recognised as the prophet which instructed him to go to Kalimdor, and he told them that they must all ally if they wished to defeat the Burning Legion. The three hesitantly agreed.

Cairne's wisdom and strength, and the power of his tauren warriors, helped Thrall to reclaim Grom Hellscream. In a combined effort, the sorcery of all three races were needed to purge the demonic influence from Hellscream. United in arms, Cairne pledged the loyalty of his race to the Horde, and together, they managed to defeat the Burning Legion once again.

Cairne helped the orcs establish their new nation of Durotar before bidding them farewell and leaving to take his own people to a new land in Mulgore. There, they established a strong defense against the centaurs and harpies who harassed them. Several months later, however, Cairne's son, Baine Bloodhoof, was captured by centaurs. Cairne feared the worst, and slipped into a lethargic depression. His followers scrambled to lead their people adequately, but they were no substitute for Cairne's wisdom. His second, Tagar, tried to help Cairne, but Cairne would not hear of it. Tagar feared that without the leadership of Cairne, the tauren would not last long.

When Rexxar and Rokhan arrived to ask Cairne for the tauren's assistance in the coming battle against Admiral Proudmoore and his Kul Tiras forces, Cairne told them to leave him and tell Thrall that he had died. Tagar told the heroes of Baine's capture, and they quickly left to investigate his disappearance. With the help of Bovan Windtotem, they recovered Baine and returned him to his happy father.

Cairne, overjoyed, told Rexxar that not only would he pledge the service of his people to Thrall once more, he would be returning himself. He joined with Rexxar's band of warriors and returned to Dustwallow, and then helped to repel Proudmoore's forces. Victorious, they then took the fight to the humans and ended Proudmoore's invasion. Cairne returned to his people and his son in Mulgore.

Cairne also recognized that the nomadic traditions of tauren society were a danger to the survival of the people. There were few tauren, and their wandering lifestyle meant that they would be vulnerable to attacks by centaur, quilboar and other races. With the help of the Horde, Cairne secured the grasslands of Mulgore as a permanent home for the tauren, and constructed their first city high atop Thunder Bluff.

Cairne is dedicated to serving his people and to watching over their safety in an ever-darkening world. An outstanding warrior, Cairne is considered one of the most dangerous creatures alive. Despite his strength and valor, he is a gentle soul who longs only for the peace and tranquility of the open plains. It is rumored that if he could lay the responsibilities of chieftain on another, Cairne would leave Thunder Bluff in an instant and retire to the wilds. Many believe that he is training his son, Baine, to take his place as chieftain one fateful day.[4] (WoWMan 184)

Cairne Bloodhoof employed only tauren holy striders, out of respect of their long heritage. Although his demeanor did not suggest a covert mind, Cairne does not disclose how many holy striders he employed, only that they are all tauren. Perith Stormhoof, a notable holy strider works only for Cairne Bloodhoof and kept many of his leader’s secrets (even secrets Thrall doesn’t know).[5] (LoM 196)

Cairne was the spiritual leader for the tauren tribes in Kalimdor. He had an incredibly strong connection with the environment and deeply respected both the elemental forces and the natural beasts of the wild.

Cairne was an extremely wise individual, but his lumbering demeanor often comes across as ponderously slow to members of other races. He always prefered to contemplate problems before acting to try to solve them, and frequently meditated for several days in a row without interruption. However, when he did decide to act, Cairne could rarely be deterred from his path. He fought with incredible passion, but was never out of control. He prefered to observe his enemies before fighting them so that he could more fully understand their strengths and weaknesses.

Cairne had a very trusting attitude toward orcs and greatly respects their newly shamanistic culture. Night elves are likewise regarded positively because of their strong connection with the woodland environment. However, he usually avoided humans, dwarves and goblins; and if they had to be dealt with, he tended to treat them in a patronizing manner. Cairne believed that the spiritual eyes of these races have not fully opened yet, and that members of these races are, in essence, children who are still learning and must be coddled. He had great disdain for the arcane practices of high elves and deeply resented their abandonment of the natural ways.[1] (S&L 35)

Cairne Bloodhoof is a level ?? faction leader located on the High Rise in the tauren city of Thunder Bluff.

He starts the quest

[16] Rites of the Earthmother.

He ends the quest

Cairne honors members of the Horde who attain the title of Loremaster by delivering to them their [Loremaster's Colors].

Thunder Bluff is a very easy city to get into. It can be underguarded by Horde players so you do not always have to worry about them. Get the entire raid onto an elevator and go up. However, if word of incoming Alliance raids reaches the Horde, it is likely that shamans and balance druids will blow players off the platforms, making it much much more difficult to get to him. Run straight for the giant totem pole in the center and run up it to Cairne's rise. go to the center of the little amphitheater and AoE all the guards that you pulled. Then pull and kill Cairne.

Cairne isn't as difficult to deal with as the other Horde bosses, Cairne has several knock back attacks that he will use on the tank as well as a random charge. The main tank should immediately run behind Cairne, The rest of the raid should filter out, but must not go beyond the first set of tents, as if Cairne charges them he will run back to his tent and reset.

Without the worry of a reset Cairne is a really simple fight and can be downed without much resistance.

During the Story & Lore panel of BlizzCon 2009 an artwork of Cairne and Thrall rescuing babies is shown, Chris Metzen described it as: "so bad ass".[6]

Shocked at the rumors that the new Warchief slaughtered innocent druids, Cairne challenged Garrosh Hellscream to an honorable duel in the arena of Orgrimmar. Prior to the battle, Magatha Grimtotem offered to bless Garrosh's weapon, Gorehowl. However, unknown to Garrosh, Magatha secretly poisoned the weapon with a potent toxin. During the course of the fight, Cairne appeared to have the upper hand until his ancient Bloodhoof Runespear was shattered by Gorehowl. Garrosh attacked again, cutting Cairne along his chest. As Cairne began to retaliate, the poison from Gorehowl sank into his blood, weakening him. As he died from the poison he realized Magatha's betrayal, his final thought "And so, I, who have lived my whole life with honor, die betrayed". His body was taken to Thunder Bluff, and after the uprising of the Grimtotem and retaking of Thunder Bluff by his son, Baine, Cairne's remains are placed upon a pyre along with the shattered debris of his Runespear. Thrall returns to mourn him, devastated by the loss of his friend. In a final farewell and show of honor to his friend, Thrall took a small piece of the shattered Runespear with him.

Baine then succeeded his father as leader of the Horde Tauren.[7]

Archimonde's return and the Flight to Kalimdor
Cairne meets Thrall 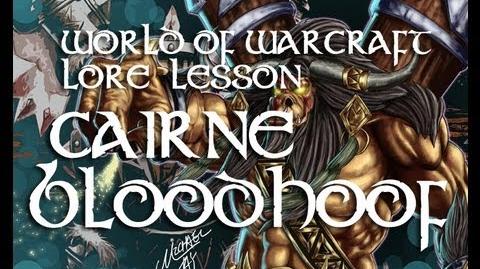 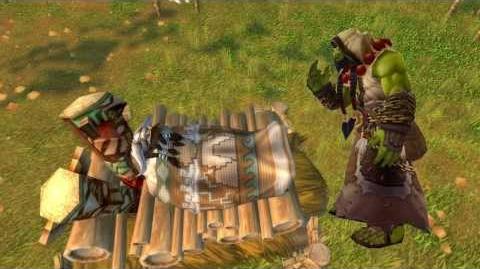 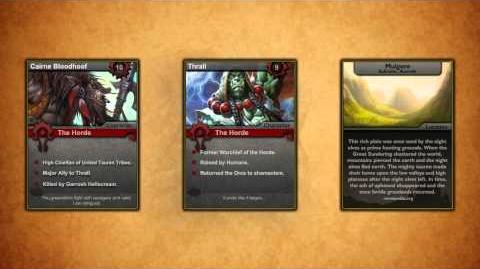 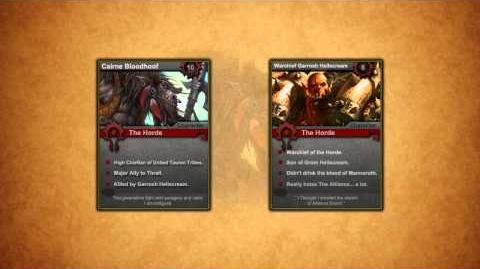