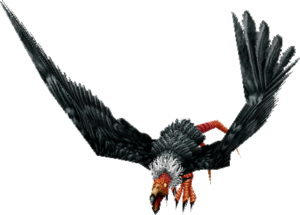 Carrion birds are large, carnivorous, scavenger birds. Other species include buzzards, rocs, condors, vultures, and swoops. They usually have featherless heads and broad, slow-flapping wingspans. Carrion birds are sometimes found lurking about the bones of dead beasts and ill-managed graveyards.

They can be found in Mulgore, Westfall, Tanaris, the Arathi Highlands, Badlands, Blasted Lands, Thousand Needles, Desolace, Deadwind Pass, and Redridge Mountains. Carrion birds have also been seen in the Hellfire Peninsula and Terokkar Forest of Outland.

In the Burning Crusade, there is an Outland version of the carrion-bird which includes two heads with brightly colored feathers.

Though hunters can respec their pet carrion birds into Cunning or Tenacity, they are inherently Ferocity. In addition to the abilities that come standard with all pets ([Growl] and [Avoidance]) and those given to their natural or retrained specialization, all carrion birds are given the following:

They are not seen very often as a hunter pet, possibly because their large wings can interfere with targeting.