Cat Form is a shapeshift druid ability learned at level 8. Similar to a Rogue, it relies on an energy bar and combo points to use most of its skills. Druids in Cat Form also gain the ability to Track Humanoids, making a cloaked Cat Form druid perfect for PvP ambushes.

The original night elf and tauren in cat form. 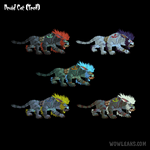 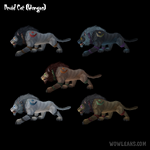