Catapults and trebuchets use a lever arm to hurl a projectile in an arcing ballistic trajectory toward their target, yet that simple mechanism is employed in many different manners on the battlefield.[1] (A&HC 122)

A spring catapult lacks the axle used by many similar weapons and instead uses a windlass and pulley system to draw back its flexible lever arm. Once a projectile is mounted in the sling at the end of the arm, the arm is released to hurl the projectile at the target. Spring catapults are easy to construct and are often built from scratch by tinkers and engineers on the battlefield.[1] (A&HC 122)

The lever arm of a torsion catapult is mounted in an axle made of a twisted skein of leather or sinew. Once winched back into place, the basket on the end of the lever arm is loaded with a projectile that can be fired downrange.[1] (A&HC 122)

A larger version of the torsion catapult, the siege catapult is made to hurl large payloads far behind the enemy's front lines.[1] (A&HC 122)

Siege catapults in World of Warcraft

Catapults appear in the Isle of Conquest battleground, as a means of propelling the driver great distances. While the primary use is to launch one's self over the walls of the opposing keep, other uses can be imagined.

Originally intended as a mass-produced siege weapon that could be carried in a soldier’s backpack, these catapults can be reduced to the size of a child’s toy upon command. Unfortunately, they proved too fragile and expensive to truly catch on. One orcish army drained its entire treasury to create a kind of “catapult cavalry” unit equipped with these tiny weapons, only to lose the whole unit (and their weapons) in a single ambush. Unaware of their true powers, the victorious opponents took the “toys” home to their children. No one is sure how many of these items are now scattered around the world, gathering dust on a child’s bedroom shelf. This is a shrinking spike stone siege catapult that effectively has the shrinking property twice. The siege weapon can be made to shrink to approximately a foot in size, enabling it to be easily packed away with its commander’s gear.[2] (M&M 128)

As the ultimate machine of war during the First War, the catapult brings fiery death to all who stand in its way. Capable of destroying any target in its range, the projectile from a catapult can smash the toughest of defenses, or through the sides of buildings. This behemoth is large, slow, and difficult to maneuver, but the power that it holds made it an essential part of Alliance forces during the First War.[3] (W1ManH 27)

The same technology was adapted into the spring, torsion and siege version seen after the First War.

After the First War, humans favored the ballista (although they hadn't completely stopped using catapults, see above) which was a joint collaboration of the Alliance forces.

Used during the First War. Destruction and mayhem are its purpose, and those who are its target will reap only death. Chaos reigns supreme as the ground shakes with the approach of these gruesome machines. Walls and buildings prove no barrier to the devastation of the orcish catapult. Although they are sluggish and huge, your forces will prove unstoppable when you command these devices.[4] (W1ManO 49)

In Warcraft: Orcs and Humans, the human and orc catapults were identical. By Warcraft II: Tides of Darkness, humans replaced their catapults with ballistae, presumably because they were better than the catapults. However, the orcish catapult and the human ballistae were still identical for combat purposes (unit data). It is possible the orcs upgraded their own catapults during this time, which would account for the spikes on the wheels among other visual changes. Furthermore, in Warcraft: Orcs and Humans, catapults could not have their weapon damage upgraded, whereas in Warcraft II:Tides of Darkness, they could.

During the Second War. Sharpened horns, crimson with blood of those unfortunate enough to be caught in their path, herald the advance of the orcish Catapult. Approaching on the battlefield, its grim visage is enough to make the weak human troops flee in stark terror. These cumbersome, wheeled machines launch deadly incendiary shot which explodes upon impact. The sheer destructive force of these great engines of war make them feared and respected throughout the land.[5] (W2Man 74)

During the Third War. The orcish catapult has always been a standing asset to the Horde. Capable of hurling fiery projectiles over great distances, the catapults have been the doom of many Alliance regiments.[6] (W3Man 89) Catapults served as the Horde's greatest siege weapon until the advent of the demolisher. 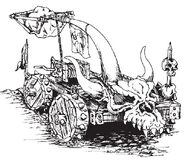 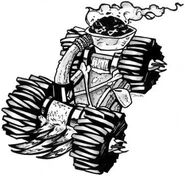 As seen in Warcraft II in-game.

As seen in the end cinematic of WC2 orc campaign.

As seen in Warcraft III in-game.

As seen in Thrall's Vision.

Catapult in WoW.
Community content is available under CC-BY-SA unless otherwise noted.
Advertisement