The Chamber of Aspects, also known as the Chamber of the Aspects,[1][2][3] is a secret chamber where the five great Dragon Aspects would convene whenever they wished to meet.

It was here that Neltharion revealed the Demon Soul, his solution to ending the invasion of the Burning Legion, and urged the other Aspects as well as their respective flights to give up a portion of their essences to power it. Unknowing of his plan, they did so — and enslaved themselves to Neltharion's will.[4][2]

In The Well of Eternity, the Chamber of Aspects was described as "...a vast, monumental cavern, so expansive that even Alexstrasza appeared as little more than a gnat in comparison." The Chamber's walls were featureless and frictionless, smooth yet curved, the floor was an immense flat circle that was geometrically flawless, and it was lit by a golden illumination with no source.[5]

Presumably, the Chamber of the Aspects was located somewhere in ancient Kalimdor; its exact location before and after the Sundering was unknown (Until Wrath of the Lich King).

Later information suggested that the chamber was accessible anywhere the Aspects chose, but was mostly done in the most remote of places, away from prying eyes. However, one trying to enter had to be flying[6], as Alexstrasza and Korialstrasz did.[7]

The Chamber of Aspects underneath Wyrmrest Temple is in fact the Chamber in which the Aspects met. The Chamber in The Well of Eternity is not a completely different and more private place.[2]

At least some dragons consider the location related to a dragon's afterlife.[3]

In the battle with Yogg-Saron, a vision of Deathwing creating the Demon Soul here with the other Aspects can be seen.

In World of Warcraft: Wrath of the Lich King, the Chamber of Aspects is the location of a single boss raid encounter, similar to Onyxia's Lair, with the ability to add more encounters.[citation needed] The instances are titan in style.[8]

It now appears to be a small antechamber beneath the Wyrmrest Temple in the Dragonblight of Northrend (which more or less contradicts the description made in The Well of Eternity). There is a meeting stone in the center of this room.

It is implied from its design that there will be at least five bosses, with one for each flight, as there are five gate points which all have two guardians of each flight. As of patch 3.3.2, there is still only one instance and the mystery remains as to why would mortals fight against the last three good-aligned dragonflights (a question that has been answered somewhat by the announcement of patch 3.3.5).

The Obsidian Sanctum is the black dragonflight area of the Chamber of the Aspects, available from the start of the Wrath of the Lich King expansion. It holds one raid boss — Sartharion. He is joined by three allies around the instance — Shadron, Tenebron, and Vesperon — who will assist Sartharion if they are not defeated.

The waygate that leads back to the Chamber of Aspects.

Inside the Obsidian Sanctum.

A powerful war party of the Black dragonflight, led by the fearsome Twilight dragon, Halion, have launched an assault upon the Ruby Sanctum beneath Wyrmrest Temple. By destroying the sanctum, the Black dragonflight look to crush those that would stand in the way of their master’s reemergence into Azeroth and to ultimately shatter the Wyrmrest Accord – the sacred bond that unites the dragonflights.

The battle that is to come will surely deal a crippling blow to the Red dragonflight, however, it is up to you to stop this unprecedented offensive and defend the Ruby Sanctum. First you must face the assault of Halion's servants, Saviana Ragefire, Baltharus the Warborn, and General Zarithrian, before squaring off against Halion the Twilight Destroyer, a new and deadly force in this realm. 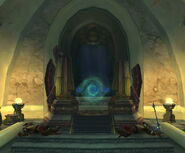 The waygate that leads back to the Chamber of Aspects.