Although many of the races on Azeroth have children, the majority of NPC children in the game are human. A few dwarf, night elf, and orc children do exist in-game. Very few, if any, Forsaken, gnome, tauren, or troll children have been seen in-game. There are distinct models for children of human, orc, blood/High Elf, draenei, and pandaren. The children of most other races currently in-game use the shrunken version of the adult models. Babies of most races are also shown in World of Warcraft. The newest seen are the pandaren children, some of which are sitting near Jojo Ironbrow by the Singing Pools of Wandering Isle and later two specific ones that greet and admire you right after you rescue the Huo, the Spirit of Fire. For those who visit Pandaria, many pandaren children will be encountered, with especially curious ones at Dawn's Blossom in the Jade Forest.

Children are unkillable NPCs.[citation needed] They cannot be attacked and are not caught in AoE attacks. Presumably, the designers feel that the possibility of killing children would not be appropriate game content. Games that allow violence against children would get higher content ratings[1] in some countries. 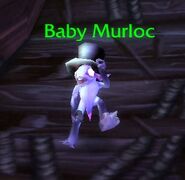 WoW Insider Which race has the creepiest-looking children? by Dawn Moore Jun 22nd 2012 at 1:00PM
Community content is available under CC-BY-SA unless otherwise noted.
Advertisement