Chronicle of the Annoying Quest is a comedic World of Warcraft fan movie created by Baka Savant Productions. It is an episodic Machinima that follows a few different Alliance characters in their attempt to complete a long-winded quest.

Chronicle of the Annoying Quest follows Guy, Ellers, Flayme, Kit, Hana, Deuce and Rora on their quest through Azeroth. In each episode, the characters get into mishaps, scrapes and issues that continue to deny them the prize of finishing the quest. As the episodes continued the cast met the villains of the season and began to take on a side plot, fighting off the villains.

Voliostromort Guy (aka. "Guy", because he hates his first name) is a Human Warlock. He is voiced by Kam Uraki, the writer/director of the series. Guy is best friends with Ellers, and they often are found arguing a geeky topic. Still, the two are very close friends and neither of them would leave the other behind (Ep. 16). Though the quest was originally intended to be for Ellers, Guy was told he must go as well or he'd be "Thrown in the Stockade for collaborating with demons". He was also the one to convince Hana to transform into a cat. His luck with keeping his body as is has also been on the downside since his soul was ejected from his body by drinking one of Deuce's experimental invisibility potions (Ep. 5). Since then guy has been not only a ghost, but also trapped in a soul shard, undead, a series of different things both seen and unseen (Ep. 28) and also a Blood-Elf. Guy has a fear of flying brought on by being struck in the head with a Griffin dropping. He also has trouble with women, though his lucked changed as a Blood-Elf when Stephie takes notice.

Ellers is a Human Paladin, and a new member to the Holy Order of the Light. This did not come without a fight as it took him four times to get accepted. Ellers chose to join the order in an attempt to "get chicks" from a paladin-only bar known as "The Pious Patron". This is all unfortunate for Ellers however as the order is one of celibacy. A long running joke of the series revolves around this and it is punchlined by the fact that he does not know what celibate means. Ellers was charged by "Higher ranking Paladins" to 'Find a black dragon of at least 2000 years of age... and to bring it's head back as proof'. Ellers is voice by David Christopher.

Hana is a male Night Elf Druid. He is currently dating Kit. Hana was on a quest with Kit to retreive parts of a black dragon when they overheard Guy and Ellers discussing their need to find one. They then joined forces and made their quest one. Hana (unlike most druids) has a problem with shape shifting and has gotten stuck in cat form for a portion of the series. This was fixed in Moonglade and Hana was given a Ring of Shape Shifting. He is likely the most serious of the Alliance Characters. Hana is voiced by Adam Brannon.

Kit is a Human Warrior. She is dating Hana and has a distaste for Hana's ex, Flayme. She and Hana joined Guy and Ellers in there quest to get the parts of a black dragon that are needed to create a powerful aphrodisiac for Hana. She attributes this to the fact that his race is no longer immortal. Kit also underwent an appearance change in Ep. 23 when she changed armor and began wielding the Arcanite Reaper. She and Flayme have also set aside their differences and are seemingly becoming friends. Kit is voiced by April Ardis.

Is a Female Night Elf Priest. She is also a Priestess of Elune. She is Hana's Ex and her introduction completes a love triangle within the series. She still has feelings for Hana, and will often point things out to him that would make him want to come back to her. Flayme's voice has changed a few times. She was first voiced by Fae Cahill, then by Sarah Brinks, but Fae Cahill is voicing her again to finish up the series.

Is a Male Gnome Mage. He is an alchemist and also a powerful spell caster. Deuce is very touchy about is height and once leveled an entire village of Horde for pointing it out. It was later revealed that he forced them to write "I will not call others short." with their own entrails. Like most gnomes, not all of Deuce's ingenious plans work as intended. Deuce is voiced by Ian Boyle.

Is a Female Draenei Hunter. She saved the group from certain death toward the end of season one. It is unclear as to why she was inclined to help them, but she has quickly earned the trust of the group. It has since been revealed that Rora is Dirim's spy(ep 32). Dirim referred to Rora getting her revenge, although what this entails has yet to be revealed. Though Rora is a hunter, her pet Rebel is rarely mentioned or seen, however he does exist. We also meet her Aunt and Uncle in a later episode. Rora is voiced by Deuce's real life older sister, Rora Boyle.

Is an overly optimistic Male trapped in a sword. His kind heart was taken advantage of by his brother, Eric. He touched an enchanted sword and he and his brother became trapped within. In a mix up at the end of season one, Dirim and his crew grabbed James by mistake, and are now stuck with him. Dirim, in an effort to make James look more evil, changed his appearance shortly after getting him. James is also part iPhone. James is voiced by Shane Cory.

Is a pessimistic Male trapped in a sword. He tricked his brother James into helping him and they both got trapped. He, like his brother, is also part iPhone. Eric was voiced by a few people, but is being done on a more regular basis by Ian Boyle, the voice of Deuce.

Is an Undead Warlock, but was formerly a Mage. He is bent on world domination and is on a quest he started with Eric to retrieve the Artifacts of Domination consisting of three pieces with which he intends to enslave the world. He commissioned a few lackeys that all seem to have their own agendas. His true identity was hinted at in Ep. 24 when he speaks with his Sister about the Staff of Domination. In Ep. 31 it was revealed that Dirim is a black dragon Dirimsinaltharian,the son of Deathwing and with Nefarian's demise his eldest child. Dirim is voice by Kam Uraki, the voice of Guy and the writer/director of the show.

Is a Female Blood-Elf Mage. She is a typical valley girl and is very concerned with typical girly things. She is also enamored by Magic and finds her self very attracted to men who can use it. She's also rather obsessed on shopping, trying to find an excuse to go to a mall at any given time. In episode 22 she was planning a route to take to Orgrimmar with Dirim, but her suggestions were ultimately overruled by him, as he didn't want to waste the time on "having her beg them to go to a mall every two seconds". She is voiced by Candace Holly.

Is a Male Orc Warrior. He is very strongly rooted in his heritage and will be the first to say so. He is also the most easily irritated of the group, and in words of Stephie, "totallly hates humans". He and Hawkwynd have become friends on this journey and are doing much of their work together. Orgrath is voiced by Dan Herdegen.

Is a Male Tauren Shaman. He is another strong-arm of the group. He and Orgrath intend to seize the Artifacts of Domination for themselves when they reach the Caverns of Time. He is also often sarcastic. Hawkwynd is voiced by Cezar Guzman, who also has provided voices for The Grind (Mr. Teeth) and other WoW Machinima.

Is a Male Troll Rogue. He's the scout of the group and uses his stealth ability to its full potential. He is working the closest with Dirim as seen in Ep. 29 where he seems to know that Dirim doesn't intend to keep Orgrath, Hawkwynd, or Stephie around. Jin'zul is voiced by Shane Corey, also the voice of James.

Is a Male Dwarf, presumably a Rogue as his role in the series is to pop out of nowhere and offer advice or help to the protagonists.

Is a Female Draenei Priest and is Rora's Aunt. She is the product of a defunct podcast audio show called 'From Draenor With Love'. It is unclear what the future holds for Vlada and her irritating husband. She is also voiced by Candace Holly, the voice of Stephie.

Is a Male Draenei Paladin and Rora's Uncle. He is very air-headed and is often distracted by either women or other assorted things that he should not be. He is also from the show, 'From Draenor With Love'. According to his wife and niece, he crashed the Exodar. He is voiced by Rob Shepard, Mac Harbor Guy from The Geek Media.

There is very little know about this character or the nature of the scene she appears in. She is related to Dirim and is the Daughter of Dirim's father , who according to Ep. 24, will hear of her assistance to Dirim. She revealed more about Dirim. With the revelation that Dirim is a black dragon, in Ep.31, it is clear that she must also be draconic. She was voiced by Audrey Van Diepenbos, fiancée to the Voice of Orgrath.

There are 3 seasons, with the third and final season beginning its run in August 2009.

"Things You Should Know"

Chronicle of the Annoying Quest has also put out a side-series called "Things you should Know" dedicated to educating players of World of Warcraft and fans of the series on things such as "raiding etiquette", as well as holidays. The public service announcements are meant to be an amusing look at World of Warcraft and its players and the Holidays take a look at the darker side of modern holidays. They are usually hosted by Guy and Ellers but have also been hosted by Orgrath and Hawkwynd, featuring other characters along the way. 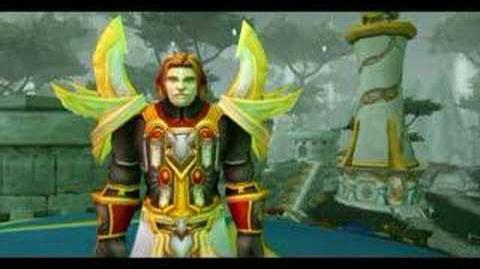 Retrieved from "https://wowwiki-archive.fandom.com/wiki/Chronicle_of_the_Annoying_Quest?oldid=2854095"
Community content is available under CC-BY-SA unless otherwise noted.