Guardian druids exemplify the term "force of nature". With the Claws of Ursoc to aid them, they will become a formidable wall of fur and rage, withstanding any who dare face their might. This artifact weapon was introduced with World of Warcraft: Legion.

Forged from titansteel by the titanic watcher Keeper Freya, these claws were her gift to the great bear Ursoc, one of the Wild Gods. He wielded the claws in countless battles until his death during the War of the Ancients. Although his body faded away, the claws remained, and legends say a fragment of his spirit lingered within them. After wrestling the claws away from Ursoc's furbolg followers, a band of druids took the claws to the Emerald Dream, sought out Ursoc's spirit, and returned the claws to him for safekeeping.[1] 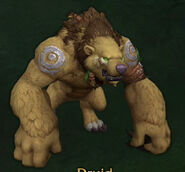