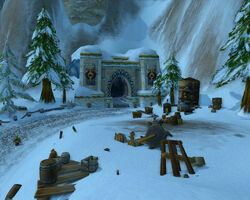 links Coldridge Valley to the rest of Dun Morogh and was crucial in providing a trickle of dwarven recruits to the frontier town of Kharanos. Initially infested with troggs, the only chance for travelers to get through was either to run at top speed or slash their way through the hostile invaders.

During the Cataclysm the pass was buried under tons of stone from an earthquake caused by the passing of Deathwing. The troggs, ousted from the tunnel, blamed the dwarves for the destruction. They swept down upon Anvilmar, taking the ill-prepared dwarves by surprise. The Pass is later cleared of rubble as low-level dwarves make their way by aircraft to Kharanos.