Commander Springvale is the third boss in Shadowfang Keep.

He also drops his

And he also drops

Commander Springvale will be pulled with two of his guards.

For heroic mode, Commander Springvale can be very difficult if not handled correctly. There are four major components to his fight:

Tank him on the wall furthest away from him (but NOT on the bench, as this tends to make the boss cast his frontal cone backwards, towards your group), with all the dps behind the boss and all ranged dps a bit away from him. If possible, CC the Officer and nuke down the Guardsman, with casters and healers being sure to keep their distance to avoid the silence. When Desecration is cast, the tank and melee dps must move out of it, as it does deal considerable damage and makes the run to get adds much slower.

When he casts Shield of the Perfidious, it is important to make sure that he is facing away from the group, at which point the tank must simply step out of the cone.

DPS need to focus on adds the whole time, and ONLY DPS SPRINGVALE WHILE THE ADDS ARE CLEAR, prioritizing the Guardsmen, as their Mortal Strike and Silence can do some real harm to healers and casters alike. The tank should not try to pick up the adds, and instead have a plate DPS pick them up, as the damage from the Commander is quite significant, and the Mortal Strike will definitely make the fight much harder to heal than it needs to be. If either add is seen casting Unholy Empowerment, it MUST be interrupted. Due to the fact that his Malefic Strike generates Unholy Power, Word of Shame or Shield of the Perfidious is an inevitability, but it is best to keep it from happening until as late in the fight as possible, making the fight easier on the healer.

Done properly, this fight is still a difficult one, with high amounts of damage on many group members. However, it is entirely possible to complete without being highly raid-geared, if all members pay close attention and are able to react quickly.

As of patch 4.0.6 the "Pull to Courtyard" strategy no longer works. Commander Springvale will receive a 200% damage buff whenever he's in the courtyard or out of his room. 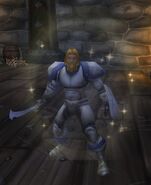 The Commander as he first appeared in the original Shadowfang Keep. 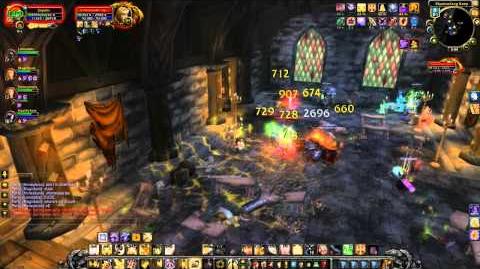