The Council of Exarchs, also referred to as "The Hand of the Prophet", is an Alliance faction introduced in Warlords of Draenor.

Until recently, the Council of Exarchs were based out of Karabor. The council was led by five Draenei Exarchs, who reported directly to the Prophet Velen. Together, they governed the Draenei society on Draenor.

When the temple of Karabor was targeted by the Iron Horde, the council were forced to move their base of operations to Elodor in Shadowmoon Valley. However, Exarch Maladaar was captured by the Iron Horde during the assault and taken to the Tanaan Jungle as a prisoner, where he was tortured along-side Drek'thar.

Alliance players first encounter Exarch Maladaar during the Assault on the Dark Portal, where he is being held prisoner along-side Drek'thar. After freeing the prisoners and fighting their way to Shadowmoon Valley, Maraad notifies the player that he has brokered a deal with Exarch Akama; Akama will provide rations for the player's newly-founded Garrison at Lunarfall, if the expedition provides labor for the harvest. Maraad and Akama begin to escort the wagon of laborers and supplies to Elodor, but are ambushed by a group of Shadowmoon Orcs along the way. The player reaches the broken wagon just before another attack, but they manage to fend off the attackers and make it back to Elodor safely.

Exarch Akama urges the player to seek out Exarch Hataaru to quell any doubts about the safety of the laborers. While in Elodor, players help Hataaru activate a defensive crystal ward. Shortly after powering up the ward, the Shadowmoon launch an attack on Elodor, but are repelled. A fungal giant from the nearby wilderness is attracted to the ward and upon killing it, Exarch Naielle and Exarch Hataaru get into a heated argument over his use of the ward.

Maraad introduces the player to Exarch Othaar in hopes of gaining more support from the council, and Othaar asks the player to gather the Exarchs together so they may all hear the petition. After completing tasks for Exarch Hataaru and Exarch Naielle, Exarch Akama sends players to speak with Exarch Maladaar, who has not been himself since he returned from the Tanaan Jungle.

Maladaar is grateful for his rescue, but informs the player that he appears to be the only one who senses Elodor has been infiltrated through the use of Fel Magic. The player discovers a Shadow Council Tome of Curses in a nearby cave, suggesting the culprit is trying to ensnare someone's soul.

As the council members are gathering, Exarch Hataaru is found dead, stabbed in the back by a weapon of fel origin. Players join Maladaar in a ritual to speak to the dead Hataaru (with the help of Soulbinder Nyami), in hopes of discovering his murderer. During the ritual, Maladaar learns that Hataaru was betrayed by one of the Exarchs themselves. Soulbinder Nyami closes the connection just as Haraaru is about to reveal her as his murderer. She explains herself by claiming that Hataaru was simply calling out to her for help. Maladaar provides players with a focusing lens meant to illuminate cloaked fel energy, and when it is activated atop the Exarch's Rise, Exarch Othaar is revealed as the betrayer. Othaar reveals his alliance to the Burning Legion and explains that he ordered Exarch Hataaru's death. He then transforms into Socrethar, but is nearly beat into submission by the player before escaping, threatening the rest of the council as he teleports away.

Eventually, Exarch Maladaar again requests the aid of the player to help the council seek out and destroy Socrethar in Shattrath City. After killing several of Socrethar's lieutenants, he is lured out of hiding and makes his last stand at the entrance to the Shattrath Dome. During combat, Maladaar offers one last chance for mercy to Socrethar, which he refuses. Socrethar is finally killed in combat by the combined efforts of the player, Exarch Maladaar and Lady Liadrin. Shortly afterward, Maladaar expresses his belief that there was some truth to Socrethar's words, that the Draenei's complacency on Draenor might actually be detrimental to their survival as a people.

Simultaneously, a separate chain of events occurs in Shadowmoon Valley, which ends in Velen sacrificing his life to purify K'ara. The Council of Exarchs is thereafter left without a figure of authority to govern them.

Players are able to reach Revered​​​​​​ reputation with the Council of Exarchs through completion of various quests including:

The Council of Exarchs quartermaster, Vindicator Nuurem, resides in Stormshield.

Reaching Exalted​​​​​​ status with the Council of Exarchs awards the achievement

Council of Exarchs as well as the title of "Prelate".

The following is a list of quests by zone which award reputation with the Council of Exarchs.

[90] The Clothes on Their Backs

[90] The Cryptic Tome of Tailoring

[90] The Power of Preservation

[91] Harbingers of the Void

[92] The Defense of Karabor

[94] Together We Are Strong

[95] The Battle for Shattrath

[96] Into the Heart of Madness

[96] Invasion of the Soul Eaters

[96] Restalaan, Captain of the Guard

[96] Retribution for the Light

[96] The Heart of Auchindoun

[96] We Must Construct Additional Pylons 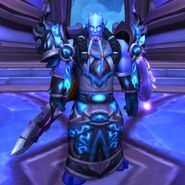 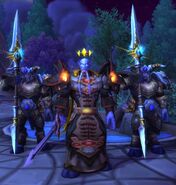