For the critter, see Crab (critter). 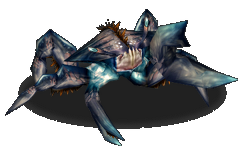 A crab is a (typically) small crustacean that is often found on beaches. Crabs have high armor, as the shell would imply. Crabs are typically neutral and ignore passers-by. They drop claws and meat that are used in cooking recipes (e.g., Crawler Meat for making Crab Cakes). Crabs are found in Durotar, The Barrens, Darkshore, Westfall, Blackfathom Deeps, Ashenvale, Desolace, Stranglethorn Vale, Azuremyst Isle and the Swamp of Sorrows. They are usually found along the coastline in some watery zones. Sometimes, they may appear as critters. One can even find tiny red lava crabs scuttling about in the Searing Gorge and Burning Steppes. Crabs are not skinnable. Crabs also appear in Wrath of the Lich King (after mostly being ignored in The Burning Crusade); one example is Kili'ua.

Though hunters can respec their pet crabs into Cunning or Ferocity, they are inherently Tenacity. In addition to the abilities that come standard with all pets ([Growl] and [Avoidance]) and those given to their natural or retrained specialization, all crabs are given the following:

The subspecies below can be tamed by hunters. Goblin hunters start with a red crab.

Note: Mobs are listed by primary color, with secondary colors (if any) listed in parentheses.