Cross Island was a cross shaped island on the southern shore of Lordamere Lake. It was the site where the Violet Citadel, capital of Dalaran, stronghold of human mages, was located.[1] (W2Man 41) [2] (LG 127)

The Violet Citadel was rebuilt on Cross Island after it had been sacked during the Second War. The orcs tried to attack it again in order to steal the Eye of Dalaran during the expansion of Warcraft II.

Cross Island does not appear in World of Warcraft and The Violet Citadel's location has been retconeed to be on the shore of Lordamere Lake. There is a Violet Citadel in today's Dalaran City which has been probably uplifted with the city itself during the war against the Lich King. 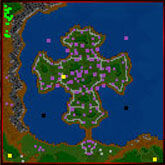 Cross Island just before it was attacked by the Horde. 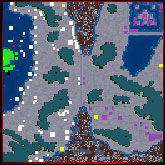 The Cross Island and the gulf-shaped southern tip of Lordaeron Lake are seen in the northeast on the in-game map (WC2 BtDP).

A stretch of land connects Cross Island to the lake's shore in Warcraft II: Tides of Darkness, however this is probably because there were no bridges included in the game.

The island is very small in the mission from the Beyond the Dark Portal expansion, probably because a much larger area is shown in the mission in question, spanning from the shores of the Great Sea to the southern tip of Lordamere Lake, as mentioned by the mission briefing.

In Warcraft III a portion of Cross Island may be visible in two of the level maps titled Misconceptions and A Dark Covenant. However, no island appears to be visible in the cutscenes or loading maps, just as it doesn't appear on the maps of Warcraft II. This may be because it's too small to have been represented on either of the maps.

One may suggest that the lake has receded or that it was filled south of the island and that is why Dalaran appeared on the shore of the lake in World of Warcraft. However since many mages probably died in the Second War, expanding the city would be unnecessary and would lessen its natural defenses. 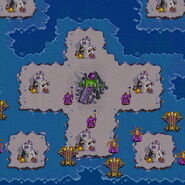 Screenshot of Cross Island in the Warcraft II expansion. 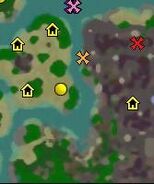 Possible map of part of Cross Island in Warcraft III